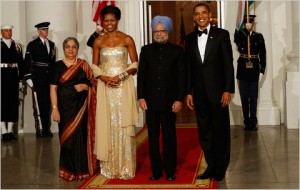 Washington, Feb 13 (IANS) State dinners don’t come cheap. The White House spent over $1.55 million on the first five dinners on President Barack Obama’s watch with the one for Indian Prime Minister being the most expensive of them all.

The tab for the Nov 24, 2009 state dinner for Manmohan Singh, his very first for a foreign leader, where a gate crashing couple stole the show was a whopping $572,187.36, according to records from the State Department Office of Protocol, whose budget covers state dinners.

The State Department released the information in response to a Freedom of Information request from CBS News made 13 months ago.

CBS said it has been waiting for over seven months for the State Department’s rundown of the expenses for the sixth state dinner honouring British Prime Minister David Cameron on March 14, 2012.

The Congress has been waiting for similar information on State Dinners from the State Department even longer, it said.

In a letter to then-Secretary of State Hillary Clinton dated Nov 1, 2012, Darrell Issa, Republican Chairman of the House Committee on Oversight and Government Reform, expressed concern about the costs of state dinners and asked for an accounting.

“Please provide,” Issa was quoted as saying, “an itemised list of costs and expenses for each of the last six state dinners, including, but not limited to, amounts paid, including reimbursements, for non-government event planners, entertainers and chefs.”

Issa gave Clinton two weeks, until Nov 15, 2012, to respond to his request. A staffer cited by CBS said the Committee never received a response from Clinton or the State Department.

The bill for Obama administration’s seventh state dinner Tuesday for visiting French President Francois Hollande is yet to be made public.