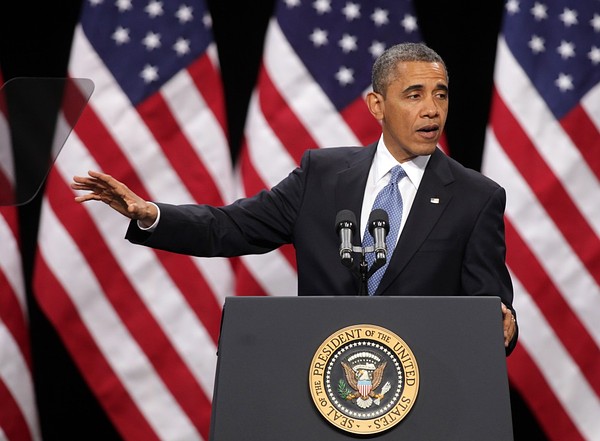 Washington, Nov 20 (IANS) A defiant President Barack Obama is all set to take executive action to protect up to five million of about 11.2 million illegal immigrants, including about 450,000 from India, from deportation.

Obama’s plans to announce unilateral action Thursday to overhaul America’s “broken” immigration system puts him in confrontation with the Republicans who would take control of both Houses of US Congress in January following their victory in November elections.

“Tomorrow night I’m going to be announcing here from the White House some steps I can take to start fixing our broken immigration system,” Obama said in a video posted on Facebook Wednesday afternoon.

“Everybody agrees that our immigration system is broken. Unfortunately Washington has allowed the problem to fester for too long,” Obama said.

“So what’ I’m going to be laying out is the things I can do with my lawful authority as president to make the system work better even as I continue to work with Congress and encourage them to get a bipartisan, comprehensive bill that can solve the entire problem,” he said.

While 5.9 million Mexicans make up over half of unauthorized immigrants in the US, India is the fourth top source country after distant second El Salvador (675,000 in 2012) and Guatemala (525,000), according to a new Pew Research Centre report.

About 8.1 million unauthorized immigrants make up 5.1 percent of the US labour force, the report said. Many of them are engaged in menial low paying jobs that Americans don’t want to do.

While no details have been officially provided, the Washington Post citing an unnamed “senior Democrat familiar with the plans,” said Obama will announce temporary protections to up to five million undocumented immigrants.

His orders will allow up to 4 million undocumented immigrants to get temporary work permits and provide relief to another 1 million through other means, another report said.

However, there will be no guaranteed protections for the parents of so-called “Dreamers,”-children protected by Obama’s 2012 Deferred Action for Childhood Arrivals (DACA) program – nor for immigrant agricultural workers, the Post said citing the Democrat.

CNN citing unnamed officials said the plan could include a stronger focus on deporting criminals who are undocumented immigrants and an expansion of worker visas in areas like technology.

The New York Times said the reprieved undocumented immigrants will also not receive government subsidies for health care available under his signature healthcare law, the Affordable Care Act that the Republicans have vainly tried to repeal numerous times.

Calling Obama’s plans “executive amnesty,” Republican Senator Jeff Sessions accused him of seizing sole power to decide who can live and work in the US. “Surrendering to illegality is not an option,” he was quoted as saying.

Republicans are considering different ways to stop funding for the president’s new measures and for the existing DACA program, the Times said.

Democrat Senate Majority Leader Harry Reid, who will lose his post once Republicans take control of the chamber in January lauded Obama’s move, saying the opposition party forced his hand.