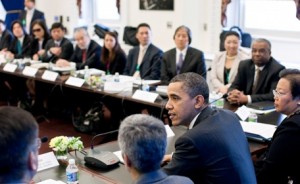 Washington, May 3 (IANS) Saying that even today South Asian Americans are targets of suspicion and violence, President Barack Obama is pushing for “commonsense immigration reform” to bring the “American dream” within their reach.

Obama Friday met with Asian American and Pacific Islander (AAPI) business and faith leaders to discuss the importance of taking action to pass commonsense immigration reform, according to a White House readout of the meeting.

The meeting coincided with the start of AAPI Heritage Month, the White House said describing it as “an opportunity to reflect upon and celebrate the many contributions that AAPIs have made to this great nation.”

A Presidential Proclamation to mark the month said: “Like America itself, the AAPI community draws strength from the diversity of its many distinct cultures — each with vibrant histories and unique perspectives to bring to our national life.”

“Generations of Asian Americans, Native Hawaiians, and Pacific Islanders have helped make this country what it is today,” it said.

“Yet they have also faced a long history of injustice,” the proclamation acknowledged noting, “Even today, South Asian Americans, especially those who are Muslim, Hindu, and Sikh, are targets of suspicion and violence.”

“With courage, grit, and an abiding belief in American ideals, Asian Americans, Native Hawaiians, and Pacific Islanders have challenged our Nation to be better, and my Administration remains committed to doing its part,” Obama declared.

Those present at Friday’s meeting “represent the success of the AAPI community and the promise of the American dream – a dream that remains out of reach for many new immigrants because of our broken immigration system,” the White House said.

Obama, it said, urged AAPI leaders to continue to press the Republican controlled House of Representatives to follow the bipartisan example of the Senate and pass commonsense immigration reform.

The bipartisan Senate bill would reunite families by eliminating the backlog of family-based visas, according to a White House fact sheet.

As of November 1, 2012, there were 1.8 million Asian family-based immigrant visa applicants waiting to join their families in the US.

Immigrant visa applicants born in mainland China and India must wait up to 12 years depending on their visa category, the fact sheet said.

The Senate bill would increase the number of employment based visas and eliminate restrictions on the number of immigrants from populous nations like India and China, it said.

But immigrants from India and China can wait 10 years or longer for some employment-based immigrant visas.

In 2009, Indian immigrants represented 56 percent of all Masters students seeking degrees in computer science and engineering, and China and India sent nearly half of all foreign nationals pursuing science, technology, engineering, and math (STEM) doctorates.

The Senate bill would create new visa pathways for immigrant entrepreneurs and investors and make key improvements to the H-1B program, the White House said.

Currently China, India, and Korea are in the top ten sending countries of immigrant entrepreneurs.

Petitioners from India (64 percent) and China (7.6 percent) continue to be the largest users of the H-1B program.

The Senate bill would increase the number of available H-1B visas by raising the baseline cap from 65,000 visas to 115,000 visas per year, the White House fact sheet said.