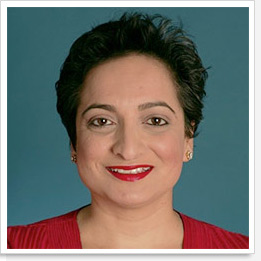 Washington, Jan 17 (IANS) US President Barack Obama has nominated Indian-American businesswoman Shamina Singh to the board of directors of a federal agency charged with strengthening communities and fostering civic engagement through service and volunteering.

Singh’s appointment to the board of directors of the Corporation for National and Community Service which engages more than five million Americans in service through its core programmes – Senior Corps, AmeriCorps, and the Social Innovation Fund – was announced Thursday.

“I am honoured that these talented individuals have decided to join this administration and serve our country. I look forward to working with them in the months and years to come,” Obama said announcing Singh’s appointment with several other key posts.

A founding board member for Indian American Leadership Incubator (IALI), Singh is currently executive director of the MasterCard Centre for Inclusive Growth, a position she has held since December 2013.

Singh is also the global director of Government Social Programmes, MasterCard’s Public Private Partnerships group, a position she has held since February 2013. From 2011 to 2013, she was senior advisor to MSLGROUP.

Previously, she served as vice president of government and public affairs at Nike, Inc from 2010 to 2011.

Prior to that, Singh served as COO for global community development at Citigroup, Inc. from 2005 to 2010.

From 2004 to 2005, she was deputy director for America Votes. In 2003, she served as a senior adviser to US house Democratic Party leader Nancy Pelosi.

She was Congressional Liaison for the Office of Congressional Affairs at the Department of Labour from 1998 to 1999, Senior Legislative Advocate for the Service Employees International Union from 1995 to 1998, and Campaign Associate for the Ann Richards for Governor Committee from 1993 to 1994.

Singh received her Bachelor of Science from Old Dominion University and a Master of Public Administration from the Lyndon B. Johnson School of Public Affairs at the University of Texas at Austin.