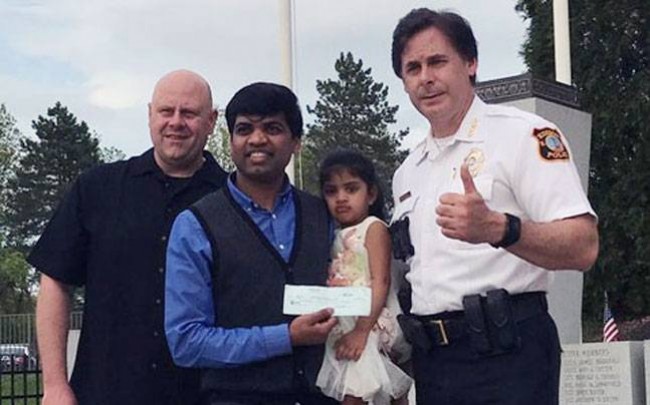 Washington, May 2 (IANS) An Indian-origin man was robbed while saving a female co-worker from an oncoming train in the US. He was later rewarded by the police.

Anil Vannavalli, 34, was waiting for a train at the Edison platform in New Jersey on Friday morning when his co-worker Madhuri Recherla fainted and fell on the tracks, NJ.com reported on Monday.

According to police, Vannavalli dropped his backpack and jumped on the tracks with two other commuters to carry Recherla to safety.

While he was busy saving the woman’s life, someone snatched the backpack.

“This theft, perpetrated in the midst of such a selfless good deed, seems so very disgusting and outrageous,” said Police chief Thomas Bryan.

The Edison Police Union awarded Vannavalli, a resident of Piscataway, with a $1,000 cheque for his selfess act.

Recherla, 26, regained consciousness shortly after police arrived. She was taken to Robert Wood Johnson University Medical Centre where she was treated for a broken knee and ankle.

The woman later said she lost consciousness and collapsed because she did not have time to eat or drink anything as she was trying to make it to the train station on time, reported News 12 New Jersey.

Vannavalli reportedly came to his colleague’s rescue just before a train pulled into the station.

He later said he was glad she survived but was disappointed that someone decided to take advantage of the situation.

No arrests have been made in the case yet.

Meanwhile, a GoFundMe campaign was launched to show appreciation for Vannavalli for his valiant act.