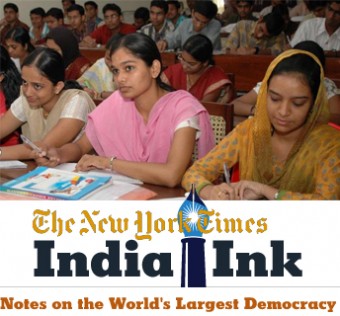 The Times though painted it only as a ‘change of address” saying “that kind of specificity is no longer the way The Times wants to direct its resources” with a commentator suggesting it “was part of a bigger strategy that will end about half of The Times’ blogs.”

“We’re Moving” announced the Times June 30 in the India Ink section saying “From now on, you will find us at a new address: nytimes.com/world.”

“We will continue to produce web-only India Ink sketches, analyses, narratives and news stories, but they will appear on the World page, along with the rest of the newspaper’s coverage,” it promised.

But for now the Times is retaining its “Sinosphere” page which it patterned on India Ink.

In “The Public Editor’s comments” Margaret Sullivan recalled that “When The Times launched its India Ink blog in September 2011, it noted that this was the paper’s ‘first-ever country-specific site for news, information, culture and conversation.'”

“Now it’s gone. These days, that kind of specificity is no longer the way The Times wants to direct its resources – at least not in the form of a blog.”

“We want to continue this kind of journalism without the manufactured shell of a blog, with its constant pressure to fill it up,” Ian Fisher, an assistant managing editor was quoted as saying.

Fisher was also cited as saying that “The Times already has ended or merged about half of the 60 or so blogs that it had at the high point two years ago, and there may be about another 10 to go, although nothing is on the chopping block at this moment.”

Commenting on the article ACDittmann, Pacific Northwest, wrote “Blogs that weren’t really blogs. People actually have to work to maintain them. These and more are the sad, somewhat contrived excuses for ending the India Ink blog, according to this article.”

KC, Washington lamented: “India Ink was the ONLY space that got stories about my home country right. This is hugely disappointing.”

But The Wall Street Journal is continuing with its India Real Time page with a lot more content.