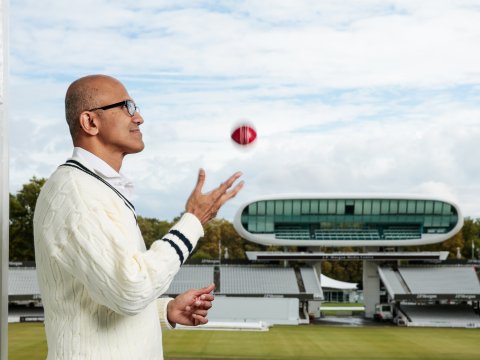 As part of a plan to overhaul its 500-acre campus in Redmond, Washington State, Microsoft will start a multi-year project in 2018 to create 18 new buildings, alongside new public spaces, transportation and, a world-class cricket field.

Cricket players already have been coming for years at Microsoft, negotiating their way onto softball diamonds and soccer fields to play their sport.

“But in a few years, they will have their own field of dreams — an oval, wicket and stumps that reflect the growing influence of employees from the cricket-mad nations of India, Pakistan, Sri Lanka, Australia, Bangladesh, West Indies, South Africa and England,” Greg Shaw, Senior Director in the Office of the CEO at Microsoft, wrote in a post on LinkedIn.

The renderings of the new Microsoft campus reveal a surprising, oval-shaped ground with a wicket in the middle next to a lush green soccer field.

“This may be the first proper, recreational cricket ground ever designed and built as part of a major corporate or community project in the United States. Wikipedia shows less than a handful of cricket grounds west of the Mississippi, and the few that do exist are in the ancestral American cricket homelands of Philadelphia and New York,” Shaw wrote.

Vishwa Gaddamanugu, who manages several cricket endeavours in the Pacific Northwest and has served as a selector for USA Cricket, cannot recall another project of this scale that incorporated a cricket grounds.

“He and others in the Indian community have advocated for years to have King County parks build an official cricket ground, even offering private financing. But to no avail,” Shaw noted.

The cricket space, located where Microsoft Buildings 5 and 6 presently stand, is currently envisioned to be about 250-feet by over 320-feet, but there is also room to expand.

“The team is speaking with cricket experts to get it just right. In that location, a well-struck ball — a six as they call it in cricket — could crash into Lake Bill, named for founder Bill Gates,” Shaw mentioned.

That Nadella is an avid cricket fan is no mystery.

In his newly-launched book “Hit Refresh,” Nadella wrote: “No matter where I am, this beautiful game is always in the back of my mind. The joy, the memories, the drama, the complexities, and the ups and downs – the infinite possibilities”.

“…On those fields, I learned a lot about myself – succeeding and failing as a bowler, a batsman, and a fielder. Even today I catch myself reflecting on the nuances within the cricket rulebook and the inherent grace of a team of eleven working together as one unit,” he continued.

In India recently, the Microsoft CEO shared the stage with veteran cricketer Anil Kumble during a discussion on his book, saying the leadership values he learnt while playing cricket in India helped him compete vigorously in the face of uncertainty — putting the team first and bringing out the best in everybody — during his 25-year career at the company.

Now with a lush-green cricket field right within the campus, Nadella can keep doing that – this time watching Microsoft employees learn those lessons.

Priest faces deportation for molestation in US