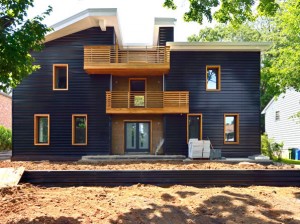 New York, Jan 29 (IANS) An Indian American man, with the help of his son, has invented a snow-melt system that helps melt snow an inch and half per hour, the media reported on Thursday.

Raj Parikh, who has lived at the New Jersey house in the US since 1980, has radically redesigned it in accordance with the nature, calling it as the “Zenesis House”, hardly had to do any shoveling in the last week’s snow blizzard in the country.

The house has no furnace, no air conditioner and no hot water heater but has the ability to melt the snow right off the driveway, reported the www.nj.com.

Using the powers of nature to fight the snow, the Parikh family developed a geothermal snowmelt system that warms water to about 100 degrees using solar collectors and geothermal pumps. That water is piped underneath the driveway and walkways.

The incoming air is also heated by exhaust air coming from the kitchen and bathroom. To cool the house, the air takes the same route; only it skips the solar collectors.

Heated driveways are widely available, but they usually burn gas or oil, Raj’s son Asit was quoted as saying.

“They’re burning fuel,” he said. “There’s no combustion in this system. It’s just the earth and the sun.”

The house also has systems to collect rainwater and the very snow it melts during winter storms.

“By capturing the sun’s warmth during the day, and by utilizing 2 ground-source (geothermal) heat pumps and our proprietary heat exchange system, our snowmelt system keeps the driveway shovelled- even on blizzard day,” Asit wrote on Facebook, expressing his happiness over the success of the system.