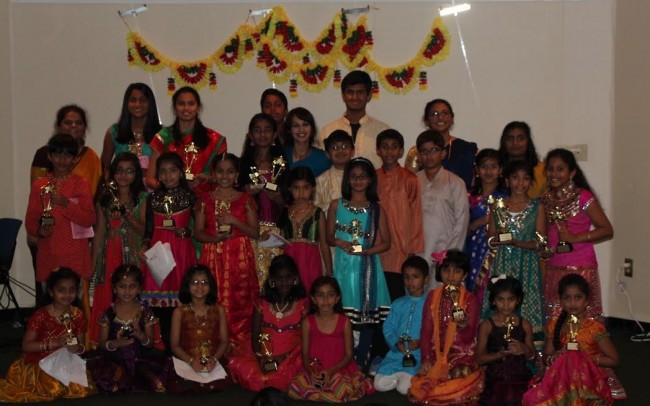 Atlanta, GA: Natyam Arts Academy, helmed by Atlanta dancer and vocalist, Preeti Vinayak, hosted its 7th annual recital for Carnatic vocal music on October 21st at the Decatur Library Auditorium. Over 45 enthusiastic students performed group and solo items by male and female composers. Srividya Janakiraman expertly emceed the program and not only gave the audience insight on the composers but also entertaining information about each participant.

Vande Mataram, by Sri Sankara Sastry, was the opening prayer song. The program started with simple Carnatic Bhajans presented by the younger students of the Academy. The audience was in awe to see younger students sing from memory; some as young as age four. Intermediate students performed Geethams and a collection of songs composed by Preeti Vinayak’s great grand mother, Sri Andavan Pitchai.  Andavan Pitchai was a famous female contemporary composer who composed songs in Tamil, Telugu and Sanskrit. Aditi Bharadwaj, Akshara Bhupathi, Sreeja Challa, Arhith Dharanendra, Rushab Skandan Shah, Varsha Ram and Varsha Srinivasan did full justice to this collection of songs and were applauded for their efforts.

The advanced students took the stage with Varnam, Padavarnam and Kriti presentations. The popular Padavarnam “Chalamela” in Nattakurinji ragam presented by Varsha Chari, Priya Chari, Sahrudh Dharanendra, Ansi Mathew, Prisha Rajasekaran, Sainath Rajendrakumar and Nethra Valli Shah drew a thunderous applause. The combination of female voices in the higher octave and male voices in the lower octaves resonated through the space.  Popular Kritis, Anandamruthakarshini and Vatapi Ganapathim, were well received by the audience.  Special mention was given to Priya Chari, who took on the challenge from the previous recital for parents to learn and perform. She went on to perform in four pieces and was appreciated by all parents!

The program concluded with Preeti Vinayak thanking volunteers, sound engineer, photographers, and the videographer. Participants were presented with trophies and students were recognized with special awards for their dedication to the arts. Upcoming event at the Natyam Arts Academy Studio will be on January 31st, 2016 with a two hour workshop for vocalists given by Opera singers from Atlanta. Contact Preeti Vinayak at 770-399-8022 or email natyamarts@gmail.com for registration and details.

The Hybrid Forms of Aniruddhan Vasudevan