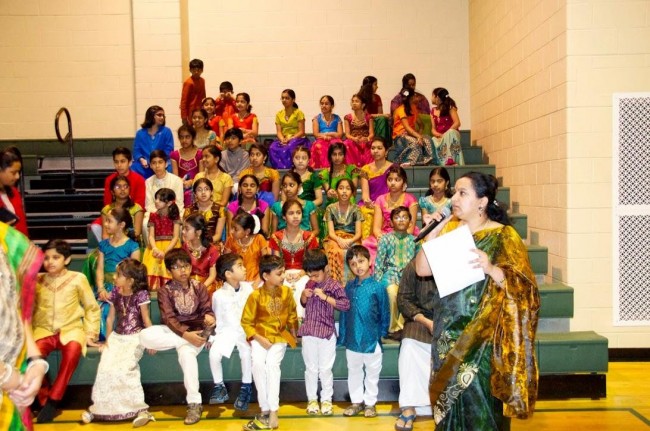 Atlanta, GA: On the auspicious day of Chaitra Navarathri, March 28, Gayatri Vasant, through her Mudranjali School of Dance and Music, skillfully coordinated a beautiful annual recital showcasing her student’s progress. Over 300 parents and friends attended and appreciated the program.

This year, the school aptly paid tribute to Sri Papanasam Sivan, the saint composer, also known as Sri Rammaya, on his 125th birth centenary and the auspicious day of Sri Rama Navami. The composer of over 2000 songs, in both Tamil and Sanskrit, Sri Rammaya would have greatly enjoyed the student’s enactment of his compositions, had he been present.

Gayatri Vasant, an epitome of vigor, was everywhere at the same time. Her energy, brilliant choreography, her choice of musical pieces and dance showed her commitment to her students.  She mothered over the young as they came to the stage and stood beside them for their first public recital. She stood on the side lines as eager adults (under her tutelage) performed for the first time. Swarms of parents and volunteers helped eagerly with the stage, audio and lighting enabling her to greet the parents and friends who constantly expressed their delight at being present at the concert.

The program had 27 pieces, with a perfect combination of bhajan, varanams, kirtanai and colorful classical and bharatanatyam recitals. The eagerness and enthusiasm with which the tiny tots, young adults and adult performers put in their presentation reflected the passion the teacher had been able to imbibe into them.

The first segment of musical renditions was accompanied by Mrudangist Prahalad Ram to bhajans sung my young ones. A heart rendering Tulasidas bhajan presented by two brothers who looked like Lava & Kusha on stage had the audience chiming in. A melodious Mirabai bhajan was followed by one on Hanuman inculcating the audience with bhakti on the occasion of Sri Rama Jayanthi, Song recitals on Andal Thirupavai on Sri Mahavishnu, a composition in praise of Lord

Shiva, the famous Thulasidas bhajan, Sri Ramachandra Kripalu Bhajamana, and finally Mira Bhajan on Sri Rama culminated this segment. The ease with which the young artist were able to render shruti from high to low and vice-versa showed the hard work and practice they had all put in.

Next the gracefully rendered and delightfully directed Bharatanatyam segment had left the audience mesmerized. The first two of the three pieces were orchestrated by new students (1.5 yrs of tutelage) and received thundering applause.  The third piece was performed by a much senior student of 7 years precedence, Maria Verghese, who had the audience spell-bound with the intricacy and grace of Bharatanatyam she displayed. She presented murugan kavtvam which was choreographed by Gayatri’s Guru Sri Vaibhav Arekar during his 2013UStrip. She received her completion certificate day from Mudranjali School of Dance.

The next segment dedicated to Sri Papanasam Sivan’s 13 compositions was accompanied by a GaTech graduate Arvind Narayanan. This young Mridangist, student of Sri Santosh Chandru, and the song recital brought the roof down with applause.

Gayatri Vasant and her senior students started this segment with a varanam in Gaurimanohari ragam, followed by Shivaranjani and Hindolam ragam. The lead singers gave harmonious allapanais at the start of each song. This was followed by older singers who enthralled the audience with bhakti songs on Gurvayurappa, and lordKrishna. Five melodious compositions on Devis by a mix of younger students had the auditorium humming. Naan Oru Vilayattu Bommai traditional Tamil song presented by the Iyer girls had a charming cadence.

The program culminated with three adult performances. Gayatri Vasant and Anu Balaji presented a beautiful composition in Shanmugapriya ragam, followed by Archana Shashikiran and Bhavani Sandeepreddy in Mukhari. The grand finale was an Abhang rendering on Lord Vitthala by Gayatri Puranam and Sruti Bayappareddy.

The program ended with a mangalam song and a touching thank you speech by Gayatri Vasanth.