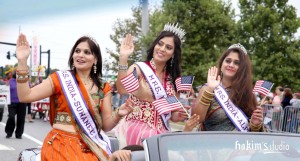 Atlanta, GA: The city of Suwanee held its 30th annual fall festival at the Suwanee Town Center Park on September 21.  Suwanee Day Festival brings approximately 50,000 people to Town Center Park every year. The festival spanned over two days, and began with a parade with over 60 floats from all over the city. The floats included those from city schools, city winners, the military veterans, businesses, pageants etc.  The parade marked the beginning of the fall festival and sparked many planned activities for the next two days including orchestra, dance, magical performances, celebrity appearances, vendor booths and stalls, fireworks etc.

After making headlines and buzz in local desi and main stream media, Mrs. India – New Delhi International 2012 and the queen of Mrs. India International 2012 Shaveta Jain was the proud addition to her home city fall festival parade. Jain has been residing in GA, USA for the past 15 years and has been a resident of Suwanee city for the past four years.  An IIT Delhi Math Graduate and Computer Science Graduate from USA,  Jain is an IT professional , a performing artist, a social activist and proud mother of two young girls. When asked what is it that she is trying to represent at an American festival, she replied, “I would like to take this opportunity to not only share my winning pride with my fellow residents but also showcase the rich cultural heritage, that India has to offer while raising awareness about Mrs. India International pageant, a pageant that promotes accomplishments and achievements of Indian married women! 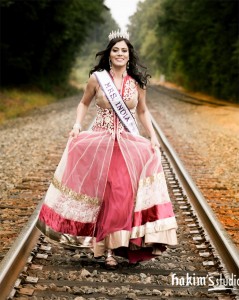 During the pageant appearance at the fall festival, Shaveta Jain was supported by city crown winners Mrs. India – Suwanee International 2013 Kamini Jain and Mrs. India- Alpharetta International 2013 Sheetal Pandit Correia. The three graceful ladies were clad in rich Indian outfits and were welcomed and cheered by the American crowd. Kids and adults alike cheerfully waved at them, calling them Indian princesses, taking pictures and sending flying kisses! It is the first time ever that an Indian pageant winner has made an appearance at her home city’s  American festival. And it couldn’t have been any better than this in displaying India’s rich cultural heritage amidst diverse American culture.

Expressing her thoughts about the racist tweets against Miss America Nina Davuluri,  Jain said, “Nina Davuluri has made the entire nation proud by winning the title of Miss America and she is as American as any white, black, Asian or Indian born in the US. Calling her an Arab immigrant is sheer ignorance on people’s part and sooner or later people will admit that she is worth the title.”

Jain also took an opportunity to thank the pageant director for Mrs. India International Adrita Khanna for giving her a lifetime’s opportunity to participate in the pageant, which has enabled her to work for the community. She also thanked her sponsors for making this pageant appearance most enjoyable and memorable. Adorned in a beautiful outfit, she thanked Bawree Atlanta for making her look and feel like an Indian princess,  Ishadow Studios for providing flawless make up services, Hakim Studios for portraits and still photography capturing the event. She also thanked the two beautiful city crown winners Kamini Jain and Sheetal Pandit Correia for their elegant appearance. Thanking the media sponsors, Jain thanked Anjali Chabbria of TV Asia and Harmeet Singh Pandha of Pardes Mag for covering the event and bringing it to the community.