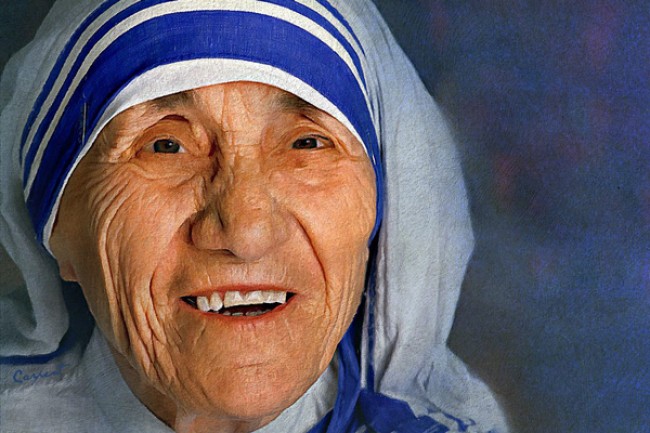 Vatican City, Sep 4 (IANS) Pope Francis on Sunday declared Nobel Peace Prize winner Mother Teresa, revered for her work among the poor in India, a Saint of the Catholic Church.
“We declare and define Blessed Teresa of Calcutta to be a Saint,” the Pope said to a roar from the thousands gathered at St. Peter’s Square here, including many Indians who held or waved the Indian flag.
“We enrol her among the Saints, decreeing that she is to be venerated as such by the whole Church. In the name of the Father, and of the Son, and of the Holy Spirit,” he said, making a long-awaited announcement.
An estimated 120,000 people attended the Mass, according to the Vatican Press Office.
Crowds flooded the Vatican to celebrate the highly anticipated canonization of Mother Teresa, an event which Catholics and non-Catholics alike had looked forward to since the nun’s death in 1997.
Many arrived before dawn to get a good spot for the ceremony, the Catholic News Agency reported.
In New Delhi, Prime Minister Narendra Modi described the sainthood of Mother Teresa as “a memorable and proud moment” — reflecting the popular thinking in the country which Teresa made her home.
Cardinal Angelo Amato read a brief biography of Mother Teresa’s work and then asked the Pope to canonize her in the name of the Church.
Mother Teresa’s life was given to service and she was committed to defending life, especially the “unborn and those abandoned and discarded”. She was “a generous dispenser of divine mercy”.
“She was committed to defending life, ceaselessly proclaiming that the unborn are the weakest, the smallest, the most vulnerable,” the Pope said.
Speaking of Teresa, the Pope noted how she “bowed down before those who were spent … seeing in them their God-given dignity.
“Today, I pass on this emblematic figure of womanhood and of consecrated life to the whole world of volunteers: may she be your model of holiness!”
After the Mass, the Pope thanked everyone, especially the Missionaries of Charity whom he called the “spiritual family of Mother Teresa”.
Hundreds of Missionaries of Charity Sisters attended the event, along with several heads of state or government. About 1,500 homeless people from across Italy were served a pizza lunch by some 250 nuns and priests of the Sisters of Charity order, media reports said.
Born Agnes Gonxha Bojaxhiu on August 26, 1910 in Skopje, now in Macedonia, Mother Teresa founded the Missionaries of Charity in 1950.
After doing iconic work in the slums of Calcutta (now Kolkata) that won universal acclaim, she died in 1997 at the age of 87. She was beatified in 2003, a key step to sainthood.
Two miraculous cures of the sick after Mother Teresa’s death have been attributed to her intercession.
The youngest of three children, she attended a youth group run by a Jesuit priest called Sodality, which eventually led her to becoming a nun.
She joined the Sisters of Loreto in Ireland at age 17 and was sent to Calcutta, where she taught at a high school.
After contracting tuberculosis, she was sent to rest in Darjeeling. It was on the way that she felt what she called “an order” from God to leave the convent and live among the poor.
The Vatican granted her permission to leave the Sisters of Loreto and to live her new call under the guidance of the Archbishop of Calcutta.
Catholic News Agency said Mother Teresa’s canonization was significant not only because it took place during the Jubilee of Mercy but also because it fell during a special September 2-4 Jubilee celebration for workers and volunteers of mercy, of whom Mother Teresa is widely considered one of the greatest.