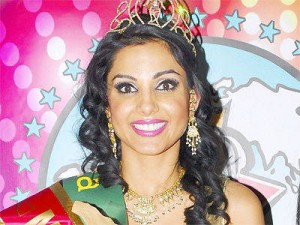 More than 40 contestants of Indian origin settled in various countries across the globe between the age of 17 years and 27 years, unmarried and citizens, residents, or born in the country they represent, participated in the Miss India Worldwide pageant.

The finale happened at the Al Raha Beach Resort, Abu Dhabi in UAE where Gill was announced as the winner. She was crowned by Miss India Worldwide 2013 Nehal Bhogaita. Being hearing impaired, Bhogaita is the first differently-abled contestant to have successfully come away with the crown in the competition’s history.

This year, all the participating girls arrived in Dubai on Sunday from countries including Australia, the US, the UK, Canada, Kenya, Oman, Qatar, Kuwait, Bahrain, Sweden and the Netherlands.

The winner took home a cash prize of $8000 and various sponsored gifts, including photo sessions and modelling assignments apart from the crown.