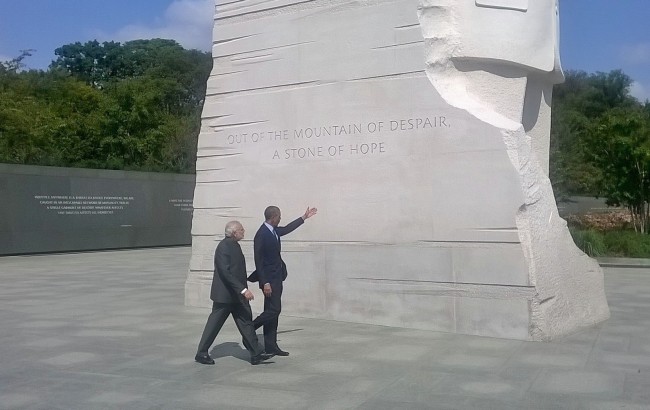 Washington, Oct 1 (IANS) Prime Minister Narendra Modi wrapped up what he himself called a “hugely successful journey” to the US, winning over everyone, from President Barack Obama down, hardselling India to big business and wowing Indian-Americans.

If star-struck Indian-Americans, a community that numbers about three million and many of whom who played a big role in his “historic election victory”, gave him an unparalleled rock star like reception, the US establishment treated him no less with Obama himself joining Modi on an unscheduled trip to the memorial of African-American civil rights leader Martin Luther King Jr.

In a joint vision statement and a joint op-ed in the Washington Post, something again unprecedented, Modi and Obama vowed to “chalein saath saath – together we go forward” with a new agenda to realise the full potential of a renewed US-India partnership for the 21st century.

Never once was mentioned the denial of a US visa to Modi for nearly a decade nor a major diplomatic row over the December arrest and strip search of an Indian diplomat that had virtually stalled India-US relationship.

A US-India joint statement issued after Tuesday’s summit at the White House that lasted nearly two hours listed what some critics called a ‘laundry list’ of things they can do together in fields ranging from health and education to space exploration. But the real significance of the trip lay in the fact that it put the India-US partnership back on the rails. And, more importantly, Modi secured a commitment from Obama to make joint and concerted efforts to dismantle terrorist safe havens.

The statement specifically mentioned four Pakistan-based groups – Lashkar-e Taiba, Jaish-e-Mohammad, the D-Company, and the Haqqanis besides Al Qaeda – and also reiterated their call for Pakistan to bring the perpetrators of the November 2008 Mumbai terrorist attack to justice.

Shortly after the statement, the US treasury targeted two Pakistan-based terrorist organisations and froze the assets of their leaders for providing financial support to Lashkar-e -Taeba (LeT) held responsible for the Mumbai attacks.

Not unexpectedly, India and US failed to reach a breakthrough on their landmark civil nuclear deal stalled over India’s tough liability laws. But, as Modi said after the summit with Obama sitting by his side “we are serious about resolution of issues on both sides to enable civilian nuclear energy cooperation to take off. It is important for India’s energy security.”

Reaffirming their commitment to implement fully the nuclear deal, they “established a Contact Group on advancing the implementation of civil nuclear energy cooperation.”

It would discuss all implementation issues, including liability, technical issues, and licensing to facilitate the establishment of nuclear parks, including power plants with Westinghouse and GE-Hitachi technology.

The statement said Modi “emphasized the priority India accords to its partnership with the United States, a principal partner in the realization of India’s rise as a responsible, influential world power.”

And “given the shared values, people-to-people ties, and pluralistic traditions, President Obama recognized that India’s rise as a friend and partner is in the United States” it said.

Noting that two-way trade has increased fivefold since 2001 to nearly $100 billion, the two leaders committed to facilitate the actions necessary to increase trade another fivefold.

The proposed steps include establishing an Indo-US Investment Initiative an Infrastructure Collaboration Platform.

India will welcome two trade missions in 2015 focused on meeting India’s infrastructure needs with US technology and services.

Modi ended his action packed journey, throughout which he has been hardselling India to US business, with an address to the US-India Business Council comprising 310 top US companies doing business with India.

Promising to replace bureaucratic red tape with a red carpet, he invited them to come to India and make in India saying “This is a win-win situation.”