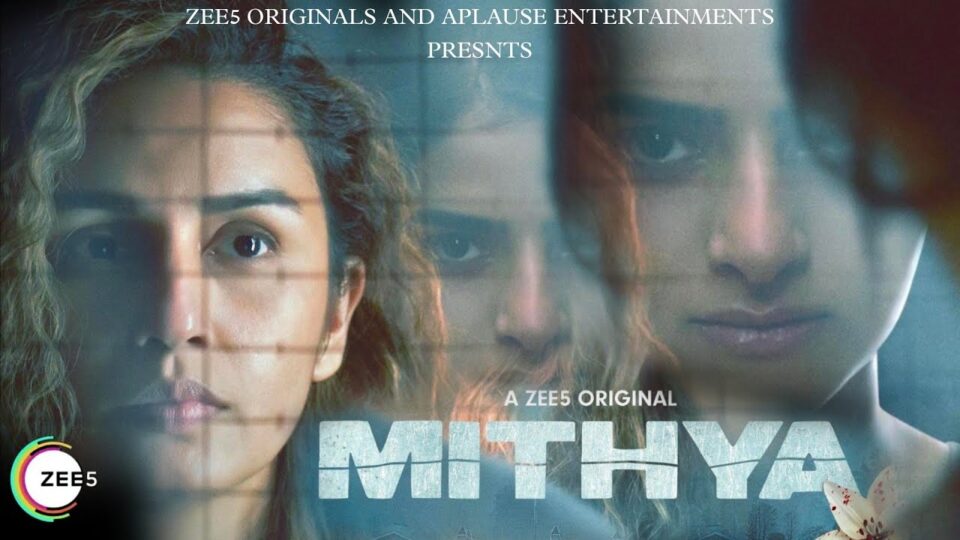 This six-episode series meaning, “false or lies,” is an intriguing noir crime thriller that depicts the aftereffects of trauma taking place within the mind of a troubled woman.

Leaden and bleak like the winters in a hill station, Mithya appears gloomy and trite but beneath its surface is an engaging thriller mounted in a pretentious manner.

With its characters quoting from literature and poetry, there are many a line that appears superfluous, a by-product of contrived dialogues in the screenplay. This is especially evident when Juhi, a professor of Hindi literature, before giving an assignment to her students on “Tathya, Satya and Kathya,” which means Fact, Truth and Fabrication (Story), tells them, in science and history, there are only lies and truth, but in literature, the truth has many facets.

The facts begin with; while lying in bed with her husband Neil (Parambrata), after a dispassionate session of what was supposed to be an intimate moment, Juhi looks into the ceiling only to notice a spider weaving a web. The spider and its web are subtle metaphors to Juhi and her universe.

Juhi’s web gets complicated when she accuses her student Rhea Rajguru, the daughter of one of the college trustees, of plagiarising. Rhea’s plagiarised assignment is just a Macguffin that allows Rhea to manipulate Neil and Juhi so that she can reveal the dark hidden truth that has been haunting her.

Most of this series pleasures come from its innate taut story, but the many feints and dodges are a killjoy. Leading in the first episode with Juhi fascinating about her colleague Vishal (Indraneil Sengupta) before going to her class, seems like a half-baked subplot. At the start of the second episode, the doctor suggests that Juhi can not conceive because of Neil. But later on in the same episode, the blame game inadvertently shifts gear on Juhi, and by the end of the series, Juhi miraculously conceives without an IVF treatment.

Also, later on, somewhere in the fifth episode, an unwarranted, misleading telephonic conversation between Sharmistha (Naina Sareen) and Juhi seems like an afterthought of the series’ creative team, to throw the audience off-balance. Similarly, scenes between Rhea and Arun, aka Ronnie (Krishna Bisht), the guard of her hostel, are a tease.

There’s some good casting. With an author-backed noir role, Avantika Dassani, in her debut performance, is sincere and projects the right mix. As Rhea, a figure dependent upon control, Avantika plays her part of menace, intrigue, and scheming minx with gusto- and conviction. She holds her steed amongst ace colleagues.

Huma Qureshi as the traumatized Juhi, Parambrata Chatterjee as her concerned densely mindless husband, Rajat Kapoor and Avantika Akerkar as Juhi’s parents – Anand and Sudha, Samir Soni as Rhea’s father Rajguru, Indraneil Sengupta and Naina Sareen as Juhi’s colleagues, K.C. Shankar as the investigating police officer Ajeet and Bishakha Tapa as his assistant Sunanda, are all fabulous actors living in the skin of their characters.

The series ends on a cliff-hanger subtly promising to return with season 2.