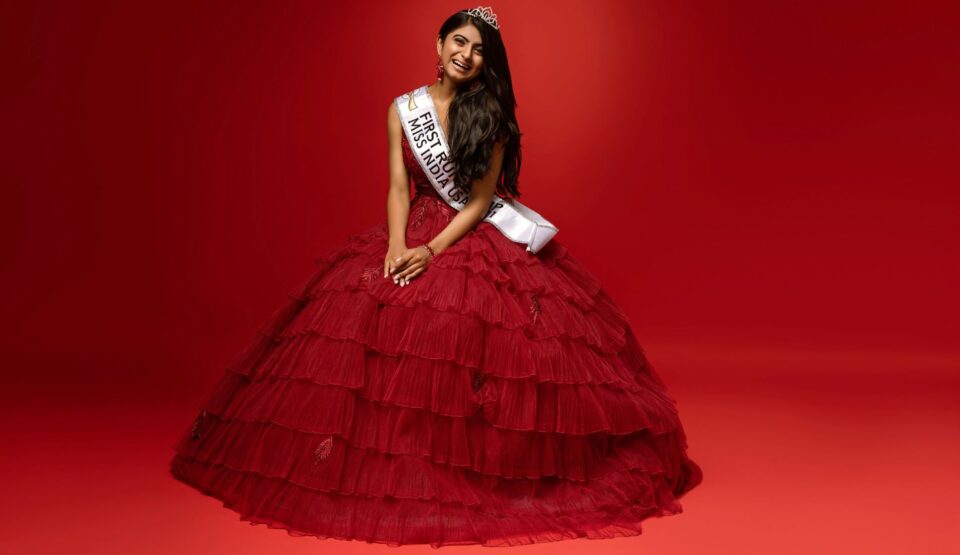 Atlanta, GA, August 5, 2021: When Atlanta’s Arshi Lalani was announced 1st runner up at the Miss India USA pageant 2021 in New Jersey held on July 16th at 12:30 am, she could barely breathe. Her pageant journey has been a blend of fears, tears, and cheers, ultimately culminating in the triumph of her indomitable spirit. Arshi, 20, suffers from brain tumor.

This year, 61 contestants from 30 states participated in three different pageants – Miss India USA, Mrs India USA and Miss Teen India USA. Winners of all three categories get complimentary tickets to travel to Mumbai to partake in worldwide pageants. Diana Hayden, Miss World 1997, presided as the chief guest and chief judge for the pageant. Vaidehi Dongre from Michigan was crowned Miss India USA and North Carolina’s Mira Kasari was declared the second runner up.

In her interview with NRI Pulse, Arshi spoke about her inspirational journey of grit, grief and gallant behind the glamor.

Arshi had been hospitalized when she passed out. She was told she was anemic and was advised blood tests and an MRI. Then 18-year-old Arshi didn’t see the need for an MRI and just hoped for things to get better. Two months later, she passed out in her car, while driving. There was no going back on the MRI this time around. The very next day, she and her family were handed the diagnosis. Symptoms increased with nosebleeds, not being able to eat, and passing out.

“I would just wake up at three in the morning and I’d go to my parents’ room and I would sleep with them because I was so scared.” Arshi is grateful to her parents, Aziz and Rozina Arshi who, despite their initial hesitance supported her all the way through and her dad, her role model, who always kept her spirits up.

“They made sure that I had the best pageant experience ever.”

Arshi was also accepted into Georgia Tech in 2020. The diagnosis and prognosis had come at a time when she was at the highest point of her life. She had lost a lot of weight and was about 89 pounds. What she lost in health, she had gained in spirit. In less than two months after her surgery in November 2020, Arshi decided forge forward and do something exciting in January of 2021. And what’s more exciting for a teenager than to dress up and feel like the princess she is? A Beauty Pageant! But there was no official contest from Georgia due to the pandemic. Not one to give up, Arshi spoke to the organizers about representing Georgia on her own and came back home as the first runner up!

“I remember when I entered the hall for the first time to meet the other contestants, and every single contestant had pageant directors, sponsors, pageant moms etc. and there I was all alone,” at 19, Arshi was the youngest contestant in the Miss category. “I didn’t even know if I would make it the top five because of my age, and the fact that some of these girls have been doing this India USA for 4-5 years and it was my first time,” says Arshi.

Arshi had worked on her outfits, makeup, travel, and entourage all by herself unlike the other contestants. “I didn’t even know I need a cocktail dress for the meet and greet.” She picked up something just before the event. Both Mrs and Teen contestants asked if she belonged to the teen category. The odds were stacking up against her in more ways than one.

Given that she was physically weak and there was no official contest in Georgia, why did Arshi choose to participate?

“There were a lot of instances where my parents asked me to take a break this year, but I wanted to do this for myself, more than anything and just prove to myself that I’m not just some patient or some weak girl that even girls who have medical issues or confidence issues can always face them.” Arshi is thankful to the support she received from her coaches Salman (Sonny) and Asma Molu, Kiran Agnihotri, Shree Saini, Madhuvalli, and Dharmatma Saran.

“I did not realize how expensive pageants. I decided to do the pageant and I realized, oh my god outfits are 1000s of dollars and so was makeup! I spent I think over $1,000 just on my jewelry. It was very expensive, but my parents were very supportive of my journey and you know even I was working as well.”  Her red ball gown was custom made from Mac Duggal.

How does she feel about being so close and coming in as the first runner up? “It left a very long-lasting impact,” notes Arshi highlighting the fact she was credited by many newspapers and many people who reached out to her after the pageant. “People will remember me as the girl with a brain tumor, who came in as first runner up dazzled and everyone with her confidence.”

Along with her dad and Mother Teresa as her role model, Arshi hopes to use her title for the good and focus on her platform “Joy to world of women and children”, which empowers disadvantaged groups and ensures proper healthcare and education. She will also be pursuing a degree at Georgia tech majoring in journalism. She hopes to a be a news reporter someday. She will consider doing the Miss India Worldwide pageant, once the Covid restrictions ease off.

“Courage is resistance to fear, mastery of fear, not absence of fear,” Mark Twain quotes. By this definition, Arshi Lalani is courage, personified.

Started by New York-based Dharmatma and Neelam Saran under the banner of Worldwide Pageants around 40 years ago, Miss India USA is the longest-running Indian pageant outside India.