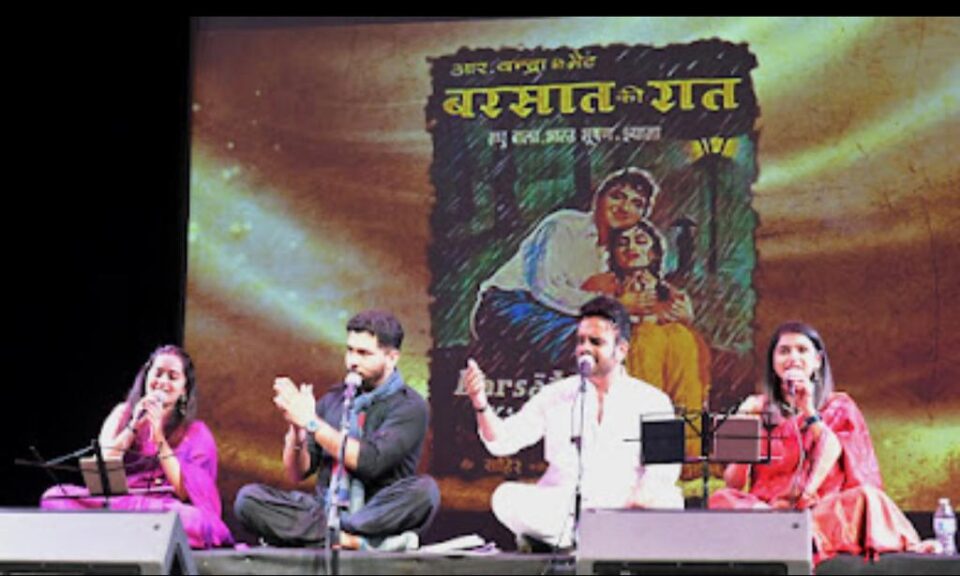 Atlanta, GA, November 18, 2022: No pal do pal ka shayar, Sahir Ludhianvi’s lyrical journey has lasted way beyond his years. Celebrating his contribution towards Urdu and Hindi literature, Sahir, The Rebel Poet – A life is Poetry, presented by Global Entertainment and Media Services, and produced by Niche entertainment, paid a fitting tribute to the soulful melodies penned by the gifted lyricist on November 4, 2022 at Berkmar High School. With soul-stirring renditions of his classics seamlessly amalgamated with an impassioned narrative sprinkled with shayari, this concert hit all the high notes, setting the houseful audience on a journey of the glorious yesteryears. Hon. Consul General of India, Dr. Swati Kulkarni graced the event.

Highly popular for his thematic musical presentations, Director Milind Oak was in his element, creating the perfect milieu for a musical delight with passionate aptly modulated narration by Nachiket Devasthali and a fine ensemble of singers including Jitendra Abhyankar, Rasika Ganoo, Dhawal Chandwadkar and Neha Varma accompanied by  Kedar Paranjape and Darshana Jog on the Keyboard, Vikram Bhat on Tabla, Vishal Thelkar playing the Guitar, Nilesh Deshpande, the Flute and Ajay Atre on Octapad, Western Rhythm, and Dholak.

The soulful rendition of the melancholic ‘Jaane woh kaise log the jinke pyaar ko pyaar mila,’ brought tears to the listener. The narrative also focused on his writings that delved deep into harsh realities of life, be it the temporary nature of human life, happiness, fame, and wealth. Another recurrent theme was his appeal to remain humble and respectful of time.. ‘Aadmi ko chahiye waqt se dar kar rahe, Kaun jaane kis ghadi waqt ka badle mizaj’ (Man should be fearful of time – For who knows when time’s temperament will change)

Never a dull moment in the over three-hour concert, the audience engaged with excitement and enthusiasm, and in complete awe of the musicians and plenty of admiration and love to Mustafa Ajmeri and Kishan Goyal for bringing the concert to Atlanta.

“At the November 4 event, the music flowed like Ganga , Jamuna, Saraswathi, Godavari and Kaveri. Oh my! The selections at Bekmar was excellent- I saw a paraplegic dancing in her wheelchair at the auditorium. Elderly gentleman danced on the floor for hours!,” Dr Jagan, among the audience said. “A kindred spirit Mustafa bhai excelled here. We thank him for his efforts and the concert was a roaring success. The four singers and the 6 accompaniments reached skywards in music rendition. What a concert !! We will always remember this concert. We will remember you Mustafa bhai,” he added with compliments from his family Radhika. Dhawal and Neha.

“We were lifted into sky by all y’all sound of music. My heart warmed up and my soul soared high on that night Nov 4 th night -that is true Diwali night . Thank you!,” JRD N Cora Bhai said.

As the group rendered ‘Ude jab jab Zulfe teri’, the audience broke into a frenzy, with organizer Ajmeri inviting folks to join him on the floor. A FB live garnered many comments from fans unable to attend.

Film lyricists, the creative minds that actually form the base of good music, often remain in the shadows. Very few have managed to rise up to the ranks of music directors and be recognized for their work, such as Shailendra and Sahir Ludhianvi. What sets them apart? It was perhaps their unadulterated presentation of truth that compelled the listener/reader to reflect, accept, and maybe even act upon.

Amongst many others, his “Main tujhe raham ke saaye mein na palne doongi/ Zindagaani ki kadi dhoop mein jalney doongi/ Taaki tap-tap ke tu faulad baney/ Maa ki aulad baney” speaks volumes about his unconventional view of a mother’s duty – which is traditionally believed to offer shelter to her young son. Instead, the mother in Ludhianvi’s lyrics tells her son that instead of offering the cool shade of mercy, she would rather let him be in the harsh sunlight of life so he can turn into steel.

Sahir completed his schooling from Khalsa High School in Ludhiana, and lived with his mother and maternal uncle after his parents separated. He studied at SCD Government College, Ludhiana, in arts stream. In 1943, Ludhianvi settled in Lahore where he completed Talkhiyaan (Bitterness) (1945), his first published work in Urdu. His controversial statements resulted in a warrant for his arrest by Pakistan Government. Post partition, Ludhianvi fled from Lahore to Delhi and eventually settled in Mumbai. He made his debut with four songs performed in the film Azadi Ki Raah Par (1949). Ludhianvi gained recognition with Naujawan (1951 film), with music by S.D. Burman. Sahir’s major success was Baazi (1951). He also worked with several popular musicians including Ravi, Roshan, Khayyam and Datta Naik, Laxmikant–Pyarelal & Khayyam, among others. From about 1950 until his death, Sahir collaborated with Baldev Raj Chopra, a film producer and director. Sahir’s last work for Chopra was for Insaaf Ka Tarazu. Yash Chopra, both while directing for B.R.films, and later as an independent director and producer, also engaged Sahir as the lyricist for his films, till Sahir’s death. On Oct 25, 1980, at the age of fifty-nine, Sahir died of a sudden cardiac death.

Sahir was a controversial figure in that he was artistically temperamental. He insisted that the film score should be composed for his lyrics and not the other way around.

Sahir often observed life from a different perspective, thought on a tangent, and made one introspect and marvel at his novel way of viewing things. Rendering perfect justice to the rebellious poet, Niche Entertainment group highlighted all aspects of his life that culminated to a glorious peak of success and recognition very few lyricists in the industry enjoy. The audience responded with equal enthusiasm, thanks to the vivacious energy of hosts Mustafa Ajmeri and Kishan Goyal and despite the three hour affair, left them yearning for more… Abhi Na Jao Chhod Kar…Ke dil abhi bhara nahin…