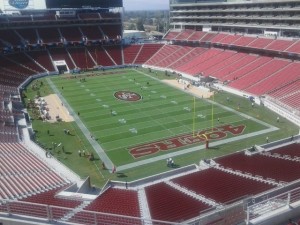 Kiran Patel, 32, has held them responsible for an attack by violent fans that left him with a severe brain injury last year.

Patel was attacked by two brothers just before the kickoff of the October 5, 2014, game against the Kansas City Chiefs at the stadium, sfgate.com cited Patel’s lawyer William Smith as saying on Tuesday.

“The environment of the 49ers attracts a bad crowd,” Smith said, adding that people “get drunk in the parking lot and come into the stadium acting aggressively. You shouldn’t go to the bathroom and come back with a brain injury”.

Patel and his cousin, Amish Patel, have sought unspecified damages against the companies that operate the stadium, saying the security was inadequate to protect them from drunk and violent fans.

The restroom attack on the Patels was captured on video and posted on YouTube but was later removed.

Kiran Patel was hospitalised for several weeks after the attack. He suffered bleeding on the brain and underwent surgery to remove part of his skull to relieve swelling.

Amador Rebollero was sentenced to five years in state prison on two felony assault charges, while his brother Dario was given 30 days in county jail and three years of probation.