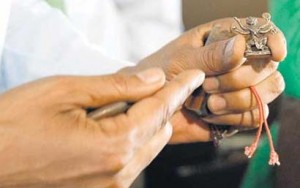 Washington, Jan 16 (IANS) A statue of the Lord Hanuman is one of the selective items of personal significance that US President Barack Obama carries in his pocket.

Obama disclosed this in a YouTube interview on Friday, which the White House scheduled as a way to reach to younger audiences as it promotes the president’s final State of the Union address held on Tuesday.

During an interview with YouTube creator Nilsen on Friday, Obama was asked to showcase an item of personal significance.

He pulled from his pockets a series of small items, each of which he said reminded him “of all the different people I’ve met along the way”.

The president said that he seeks inspiration from all these whenever he feels tired or discouraged in his life.

The items included rosary beads given to him from Pope Francis, whom he met at the White House in this fall season; a tiny Buddha statue procured upon him by a monk; a silver poker chip that was once the lucky charm of a bald, mustachioed biker in Iowa; a figurine of Hindu god Hanuman; and a Coptic cross from Ethiopia, where he visited in July, CNN reported.

“I carry these around all the time. I’m not that superstitious, so it’s not like I think I necessarily have to have them on me at all times,” he said.

But, he added that they do provide him some reminders of the long path of his presidency.

“If I feel tired, or I feel discouraged sometimes, I can kind of reach into my pocket and say yeah, that’s something I can overcome, because somebody gave me the privilege to work on these issues that are going to effect them,” he was quoted as saying.

As part of the interview, the President also revealed that he hasn’t seen the new Star Wars movie.

Obama said that he believes Donald Trump’s presidential campaign might peter out and added that he thinks women should advocate for removing some sales taxes from tampons.

Ami Bera, Ro Khanna down, but not out yet