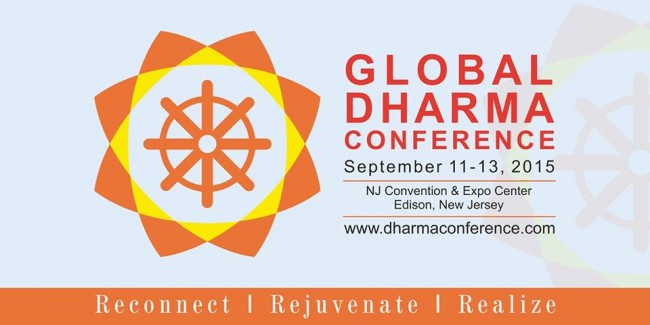 Edison, New Jersey – More than three thousand people, including young Hindus from 20 countries and 70 universities, are coming together for an epic gathering to promote and explore Dharma and global harmony in mid-September, with invited delegates and experts from diverse fields such as spirituality, science, academia, business, politics and the arts converging on New Jersey Convention andExpositionCenter.

“Dharma, one of the most profound concepts realized by enlightened Hindu sages and those of other Indic traditions, literally means ‘that which holds together’ or ‘that which sustains a being,’” said HSC Chairman Nikunj Trivedi. “Going beyond religion, it is a combination of forces that sustain life and principles that lead to the path of righteousness and harmony.”

Two recent and historical September 11th anniversaries give scores of reasons to recognize, observe, and practice inner and global harmony.  “‘Never Forget” became the common slogan for the series of attacks in 2001 by Islamist terrorist group Al Qaeda in which 3,000 people of all faiths, backgrounds and cultures perished in a matter of hours.f On September 11th 1893, the Parliament of Religions convened in Chicago: The Parliament was a unique phenomenon in the history of religions. Social reformer, philosopher and revered Hindu spiritual leader Swami Vivekananda took the long voyage fromIndia for the gathering and began his famous speech addressing the audience as “Sisters and Brothers of America.”

Accordingly, the 25th anniversary conference in September is brimming with carefully selected dignitaries, as well as eminent spiritual and thought leaders to foster deeper understanding and spiritual practices of Dharma for a fulfilled life and a harmonious society. The  expanding roster includes confirmed luminaries such as renowned spiritual leader Sri Sri Ravi Shankar of the Art of Living Foundation via live video conference, the Indian Prime Minister’s personal and known yoga teacher Dr. HR Nagendra Rao; and engaging panel and panelists on ‘Dharma and Science’ with NASA scientist Dr. Kamlesh Lulla, noted physicist and Hindu scholar Dr. GNR Tripathi of the world renowned Radiation Research Lab, genius young math professor and the winner of the Fields Medal, equated as the “Nobel for Mathematics”, Dr. Manjul Bhargava. Renowned author and the Founder of the American Institute of Vedic Studies, Dr. David Frawley will give invaluable insights on Hindu response to Western intellectual challenges.  Other Hollywood/Bollywood celebrities and well known personalities are to be announced soon.

“The campus based Hindu Youth movement actually launched inGeorgia,” said Gokul Kunnath who is also the Founder of the Atlanta-based United States Hindu Alliance, or USHA. “Every one says that the youth is the future. Supporting HSC is supporting our progeny and future generations of our own offspring. We have the moral duty to whole heartedly support the Dharma Conference being planned by HSC on its 25th year of service to the youth and the larger community.”

The three-day 2015 conference scheduled for September 11thto the 13th at the New Jersey Convention and Exposition Center, in Edison, NJ aims to explore and understand the multi-faceted applications of Dharma for a harmonious Self as well as for the Society and the World – whether through the multi-faceted systems of Yoga or the invaluable teachings of Vedas and Vedanta. See the Global Dharma Conference website to sponsor or to attend:  www.dharmaconference.com.