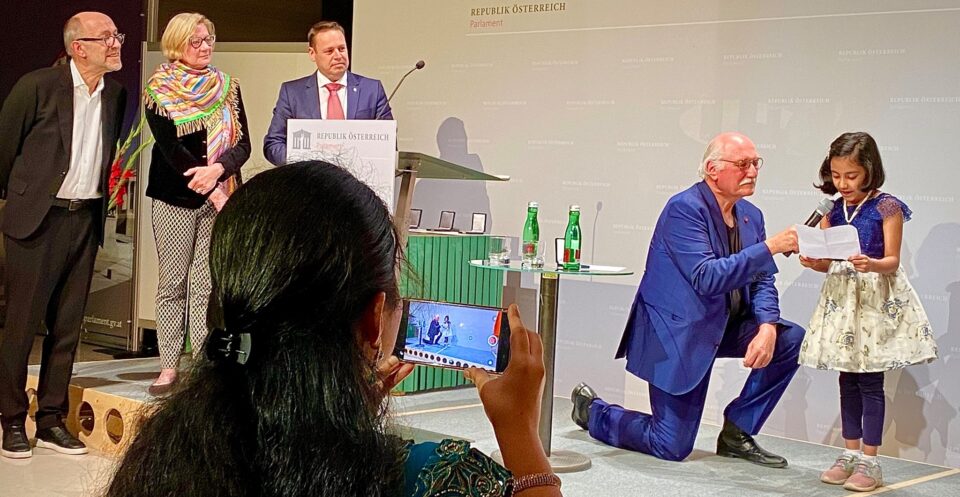 Seven-year-old Aadhyaa Aravind Shankar could hardly believe or even probably entirely comprehend the situation when her parents announced that a picture she casually shot was the winner of Children’s Peace Image of the Year-Global Peace Photo Award. The little girl had simply captured the sight of her mom peacefully falling asleep on her grandmother’s lap sitting on the floor surrounded by a few house plants right by their side, in her mom’s phone camera.

That picture, captioned “Lap of Peace” turned out be the winning capture, only one among 16,500 submissions from around the world. Aadhyaa was awarded the prize (worth 1000 Euros) at a ceremony held at the Austrian Parliament, Vienna on September 21st, the UN International Peace Day.

Aadhyaa is the first Indian and the youngest person ever to win this award. The second grader of Vidyaniketan in Hebbal, Bnagalore, India has been a photography buff since the age of four. Her favorite camera has been her mother Roshni’s cellphone which she uses to capture whatever grabs her attention. Aadhyaa’s father Aravind, a software professional, sent in her picture to the contest. One was a black & white photograph capturing Roshni resting on her mother’s lap in the latter’s Kodichikkanahalli residence.

Aadhyaa took the picture in color but transferred it into black-and-white and cropped it to concentrate on her message, that she expressed with a global claim: Irrespective of country borders, languages, cultures, she writes, “the children of Mother Earth” have the same needs. “

” I think highly of the value of growing up with her parents and grandparents and their guidance that has made a difference in her outlook and has helped her excel in all fields,” said Narayan Swamy Hebbale, Johns Creek resident and Aadhyaa’s proud uncle.

Inspired by Nobel Peace Laureates 1911 Alfred Fried and Tobias Asser, The Global Peace Photo Award celebrates the ability of humans to be caring and supportive and all kinds of pacifism and disarmament of individuals and society as a whole.

The Award recognizes and promotes photographers from all over the world whose pictures capture human efforts towards a peaceful world and the quest for beauty and goodness in our lives. The award goes to those photographs that best express the idea that our future lies in peaceful coexistence.