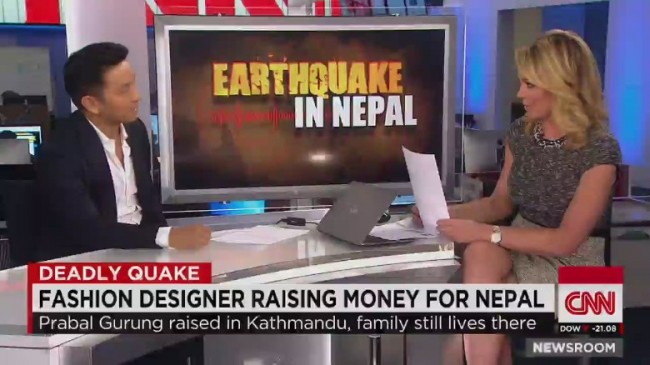 New York, April 29 (IANS) New York-based Nepalese designer Prabal Gurung has launched a fundraiser to assist disaster relief efforts in Nepal. So far, he has managed to collect over $385,000, and he has secured support from Hollywood celebrity Kim Kardashian.

Gurung has launched a campaign specifically aimed at collecting funds to support victims of the April 25 quake, under his organisation Shikshya Foundation Nepal.

The Foundation is working with CrowdRise, one of the world’s largest community raising money for various causes.

A post on the CrowdRise website reads: “Your donations will go through my organisation, Shikshya Foundation Nepal (www.shikshyafoundationnepal.org), and we will distribute 100 percent of the funds accordingly, based on the latest needs on the ground.

“Please donate generously and spread the word. We will continue to provide updates and information regarding the allocation of funds. Thank you all for your support.

Gurung’s efforts have found a fan in celebrity TV star Kardashian, who tweeted: “Praying for victims of the earthquake in Nepal. Pls. help @prabalgurung raise relief money by donating here .”

The designer, whose sculpted, modern designs have won the hearts of the fashion elite, including Michelle Obama, Oprah Winfrey and Demi Moore, praised Indian Prime Minister Narendra Modi for his quick action in providing support to the earthquake victims.

“Thank you to people of India and esp PM @narendramodi for swift & unconditional support to Nepal in time of need! A mark of a good neighbor,” read one of the tweets of the designer posted on April 26.

Writing for Time magazine, Gurung expressed how Nepal being his home has been a “constant source of inspiration” for his work as a fashion designer in New York City and how “Saturday, April 25, will be a date forever ingrained into my being”.

“I woke up heart-stricken to learn that a massive 7.9 magnitude earthquake had killed countless people in my home country, and destroyed so many aspects of Nepal… my country has suffered enormous loss, pain and devastation.”

The massive earthquake in the Himalayan nation on Saturday has claimed more than 4,680 lives and Nepali Prime Minister Sushil Koirala has warned the casualty figure could go as high as 10,000.