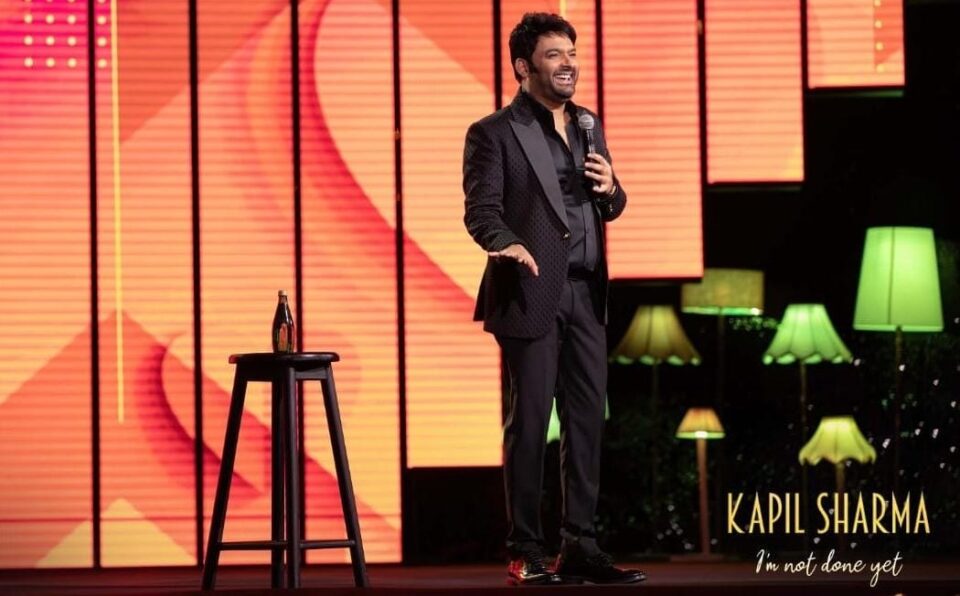 Thanks to his phenomenal success as a comedian, Kapil Sharma is a household name.

The comedian’s “what I did with me, myself, my family and friends…” show, ‘Kapil Sharma: I’m Not Done Yet’ streaming on Netflix sketches a self-portrait of a mediocre stand-up comedian behaving like God’s blessed child.

Full of himself and obsessed with his fame and success, this is not a comedy sketch, but a show that focuses on Kapil Sharma, as he essays a spanking-new monologue, so akin to Anupam Kher’s stage performance, ‘Kuch Bhi Ho Sakta Hai’.

Kapil Sharma takes perverse pleasure in his storytelling and cathartic revelations. He spends most of the time on stage ruminating about how he has evolved as a person, his depression and his experience with therapists, and how the glare of the spotlight, the rush of a good performance, and the heartsink of a comic meltdown on stage have made him what he is today — and that he is not done yet.

The show’s pacing and structure feel more deliberate, with mostly rhetorical punchlines. Kapil’s greatest strength is his intimacy with his audience, and jumping right into the action, he shows a side of himself that we’ve never seen — as a person who loves his art, despite its demanding, capricious nature.

He rambles on, revealing his social media mistakes, taking pot-shots at the country’s Prime Ministers, both past and current, talking about his relationship with his father. And he also ignorantly explains to the audience, with confidence, what “toddy” is.

There is no novelty factor in his style, tone, and presentation. With a microphone in his hand that restricts his movement, the show appears like a recorded stage performance and not one specially mounted for an audio-visual medium.

The only novelty factor of the show is Kapil’s wife Ginni, who graced the occasion as an audience and, in a carefully crafted performance, answers his questions with grace. Her responses certainly appear prepared and rehearsed. The charm of spontaneity, as a result, is lost.

Kapil also speaks about his dad and their father-son bonding at length. The highlight of this Stand-up Special is Kapil singing an emotional number in English, a tribute to his father, which ends on a sincere and earnest note.

Gujarati family that froze to death on Canada-US border identified