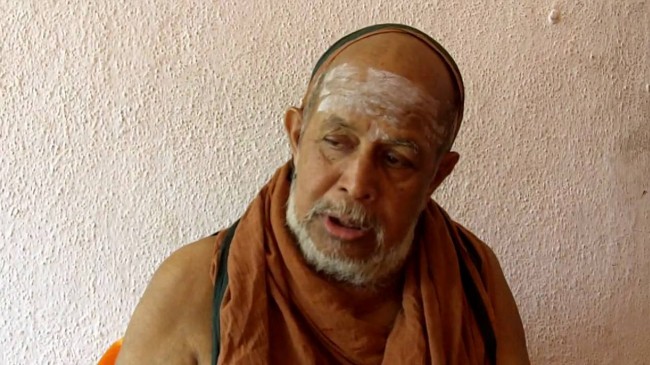 Kanchipuram, Feb 28 (IANS) Jayendra Saraswati, who broad based the activities of the Sankara Mutt with inclusive activities, died here on Wednesday in a private hospital. He was 82.

The 69th pontiff of the Mutt, established by Adi Shankaracharya in the 8th century, was ailing for quite some time. He was admitted to a private hospital here early on Wednesday after he complained of breathlessness.

Doctors said the pontiff died following cardiac arrest. His last rites will be conducted on Thursday and his body will be interred in the Mutt premises itself in accordance with traditions followed for Hindu seers.

The mortal remains of Jayendra Saraswati were kept at the Nandavanam in Kanchi mutt for devotees to offer their prayers.

He would be given ‘maha samadhi’ at the Nandavanam, near the Chandrasekarendra Sarawathi Swami’s. Meanwhile, junior pontiff Vijayendra Sarawati was elevated and given the charge of heading the mutt.

Jayendra Saraswati had a huge following in South India and had sought to play the role of a mediator in the Ram Janmabhoomi dispute during the BJP governments headed by Atal Bihari Vajpayee between 1998 and 2004.

He was also mired in controversy when he was arrested in 2004 during the regime of late J. Jayalalithaa and made an accused in the murder of Sankararaman, an official of the famous Varadharaja Perumal Temple in Kanchipuram.

He, along with junior pontiff of the Mutt Vijayendra Saraswati and 21 others, was acquitted by a court in 2013 in neighbouring Puducherry where the case was transferred from Tamil Nadu.

Another controversy in which he was involved was in August 1987 when Jayendra Saraswati suddenly decided to leave the mutt. After spending 17 days in Tala Cauvery in Kodagu in Karnataka, he returned to the Mutt to a warm welcome by thousands of devotees. He then kick-started his social organisation, Jana Kalyan.

Jayendra Saraswati sought to diversify the activities of the Sankara Mutt, which was largely run on orthodox lines for long, by entering into charitable activities. It ran several schools, eye clinics and hospitals.

He had his spiritual tutelage from ‘Maha Periyava’ Chandrasekarendra Saraswati and travelled the length and breadth of the country with his guru.

In January 1994, when Chandrasekharendra Saraswati attained siddhi, Jayendra Saraswati formally took over as the head of the Kanchi Mutt. There began a spiritual journey that saw several highs and lows for the institution.

As news of his death spread, a pall of gloom decended on the Kanchi mutt with hundreds of his followers thronging the mutt to pay their homage.

A host of national leaders and even political leaders in Tamil Nadu, who had differences with Jayendra Saraswati and the Mutt, condoled his demise.

Meanwhile, the mortal remains of the seer are kept in the Sankara Mutt in Kanchipuram so that people can pay homage.

Expressing his condolences, President Ram Nath Kovind tweeted: “Sad to hear of the passing of Jayendra Saraswatiji, the Shankaracharya of Kanchi Kamakoti Peetam. Our country has lost a spiritual leader and social reformer of rare eminence. My condolences to his countless disciples and followers.”

Prime Minister Modi also shared on the social media an old picture of his with the seer along with a condolence message.

“Deeply anguished by the passing away of Acharya of Sri Kanchi Kamakoti Peetam Jagadguru Pujyashri Jayendra Saraswati Shankaracharya. He will live on in the hearts and minds of lakhs of devotees due to his exemplary service and noblest thoughts. Om Shanti to the departed soul,” Modi said.

“Jagadguru Pujyashri Jayendra Saraswathi Shankaracharya was at the forefront of innumerable community service initiatives. He nurtured institutions which transformed the lives of the poor and downtrodden,” he added.

Congress President Rahul Gandhi said he was “saddened” to hear about the death of the Kanchi seer.

“I am saddened to hear about the death of Jagadguru Pujyashri Jayendra Saraswati Shankaracharya of the Kanchi Kamakoti Peetham,” Gandhi wrote on Twitter.

“He was revered by lakhs of believers all over the world for his teachings. May his soul rest in peace,” the Congress President added.

Senior BJP leader and former Union Home Minister L.K. Advani in his condolence message said that he knew the seer closely who played a key role in defusing acrimony between the Hindu and Muslim communities over the Babri Masjid dispute.

“I had the privilege of knowing Jayendra Saraswati Swamiji very closely. Our association became closer during the rule of NDA-I, when I was the Minister of Home Affairs in the government headed by Atal Bihari Vajpayeeji,” Advani said in a written message.

“Swamiji proactively initiated a dialogue with various religious and social leaders of the Muslim community to evolve an amicable solution to the Ayodhya dispute. This dialogue helped a lot in promoting mutual trust and goodwill between Hindu and Muslim communities,” he added.

The BJP veteran said he joined millions of devotees of the Kanchi Kamakoti Mutt in “offering prayers to the Almighty and in seeking peace to the departed soul”.

Finance Minister Arun Jaitley said: “Deeply saddened by the demise of Jayendra Saraswatiji, the Shankaracharya of the Kanchipuram Kamakoti Peetam math. With his demise we have lost a great saint of present times, who has been a guiding force for the millions. My prayers for the liberated soul.”

In a statement, Purohit said: “Yesterday only I have met him and got blessings of Sankaracharyaji.

“During his period, Jagadguru Sankaracharya had started many schools, eye clinics and hospital, Childs Trust Hospital, Hindu Mission Hospital, Tamil Nadu Hospital and other public welfare institutions for the welfare of the society. His death is a great loss to the society particularly to his followers,” he added.

Former Union Minister and PMK leader Anbumani Ramadoss said the pontiff had moved well with the people and his death is a great loss to those who are associated with him.

DMK leader M.K.Stalin, in his message, condoled the demise of Sankara Mutt pontiff and conveyed his condolences to those who are close to Jayendra Saraswati.

The Tamil Nadu unit Chief of BJP Tamilisai Soundararajan said the nation has lost a spiritual leader with a nationalist outlook.

She said the seer got down to the ground and worked against the conversion of downtrodden people.

He also set up several educational institutions and hospitals by going beyond the spiritual calling, she said.

The Rashtriya Swayamsevak Sangh (RSS) condoled the seer’s death and said Jayendra Saraswati served for protection of Hindu Dharma, Hindu culture and uplift of Hindu society. It is a great loss not only to Tamil Nadu but also to the entire Hindu society.