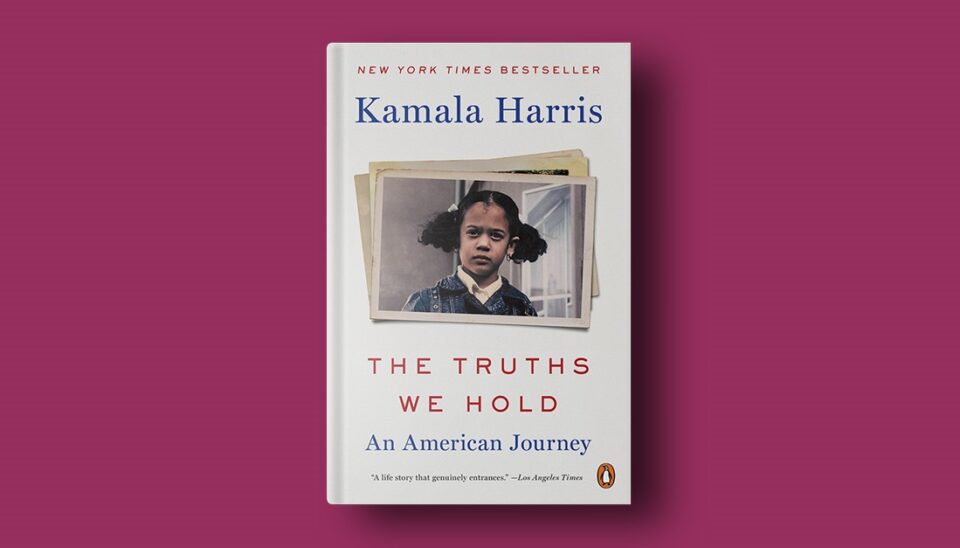 In her engrossing personal and political memoir, written in lucid prose, Kamala Harris recounts her early life, her impressive and progressive legal and political career, and communicates a vision of shared struggle. She shares her purpose, values, the core truths that unite us, the long struggle to discern what those truths are, and how best to act upon them, in her own life and across the life of our country. The acclaimed memoir has earned rave reviews from critics and readers alike. San Francisco Chronicle lauds, “an engaging read that provides insights into the influences of [Harris’s] life-most of all, her mother Shyamala Gopalan Harris, Ph.D., a breast cancer researcher… revealing and even endearing.” “A life story that genuinely entrances” commends the Los Angeles Times.

Kamala Devi Harris was born on October 20, 1964 in Oakland, California.  She is the daughter of Shyamala Gopalan, an endocrinologist from Southern India, and Donald Harris, an esteemed African Jamaican economist, who is a professor emeritus at Stanford. Her parents met as activists during the civil rights movement of the 1960s when they were graduate students in Berkeley and took her to rallies and marches in a stroller.  Young Kamala and her younger sister Maya had a happy and carefree childhood. They grew up in a diverse environment, attended an African American Church, often attended their nearby African-American Cultural Center and ‘Rainbow Sign’ in Oakland, which staged performances from some of the most prominent black thinkers and leaders of the day – men and women at the vanguard of American culture and critical thought. Kamala’s mom also took her to the Hindu Temple. They also made trips to India to meet her mom’s family, and to Jamaica to meet her dad’s family.

Harris’’s parents divorced when she was seven-years-old. She had to move to Montreal, Quebec with her mom who had accepted a research and teaching position at the McGill University-affiliated Jewish General Hospital. Harris graduated from High School in Montreal and went on to Howard University in Washington D.C., earning a degree in Political Science and Economics in 1986, and a Juris Doctor (J.D.) from the University of California, Hastings College of the Law. She later passed her bar exam at the California Bar in 1990.

Harris had witnessed many outdoor protests and marches for justice. In reflecting on those experiences, she remarked, “But I also knew there was an important role on the inside, sitting at the table where the decisions were being made. When activists came marching and banging on the doors, I wanted to be on the other side to let them in.”

Harris worked for nine years in the Alameda County District Attorney’s office with commendable prosecutorial zeal, toughness and a passion for compassionate justice. She often handled cases of gang violence, sexual abuse, and drug trafficking. In 1998 she was recruited to the San Francisco District Attorney’s Office to run the career criminal unit which dealt with violent and serial offenders. There she prosecuted homicide, burglary, robbery, and sexual assault cases – particularly three-strikes cases (only in case of violent felonies). Beyond that, she was also interested in making policy changes to reform the criminal justice system, as she believed that “we were being asked to accept false choices.” She got an opportunity at the San Francisco city attorney’s office to handle child and family services. During the two years there, she formed a task force to set up a safe-house for sexually exploited youth and shut down brothels in the city. Later, Harris became the District Attorney of San Francisco in 2004. She was then elected as Attorney General of California in 2011. She is the first woman, the first African American, and the first South Asian American to hold the office of Attorney General in the state’s history. She held this position until 2017, when she began serving as a United States Senator from California and honorably served until 2021.

Harris’s work boosted her confidence and self-belief and it transformed into a deep passion and interest in helping “both the victims of crimes committed and the victims of a broken criminal justice system.”

“For me, to be a progressive prosecutor is to understand-and act on-this dichotomy. It is to understand that when a person takes another’s life, or a child is molested, or a woman raped, the perpetrators deserve serious consequences. That is one imperative of justice. But it is also to understand that fairness is in short supply in a justice system that is supposed to guarantee it. The job of a progressive prosecutor is to look out for the overlooked, to speak up for those whose voices aren’t being heard, to see and address the causes of crime, not just their consequences, and to shine a light on the inequality and unfairness that lead to injustice. It is to recognize that not everyone needs punishment, that what many need, quite plainly, is help.”

During her time serving as District Attorney of San Francisco, Kamala, implemented several programs and initiatives that aligned with her goals to help victims and the incarcerated alike. Her ‘Back on Track’ initiative, featured job training, GED courses, community service, parenting and financial literacy classes as well as drug testing and therapy. This compassionate initiative garnered praise and became a national model. In 2017, Kamala focused on country’s bail system and introduced a Bill in the senate to encourage states to replace their bail systems. The system was designed to move away from arbitrarily assigning cash bail and toward systems where a person’s actual risk of danger or flight is evaluated. Harris supports legalizing marijuana but regulate it. In addition, Kamala instituted an implicit bias and procedural training program for the law enforcement agents and instructed to require body cameras for them. Tackling “the racial bias that operates throughout our criminal justice system” head on.

Harris is not only passionate about prison reform and aiding crime victims, she has also made great strides in local and international dealings.  Harris opposed California’s Proposition 8 which provided that only marriages “between a man and a woman” are valid. After five years, in 2013, the Supreme Court recognized marriage equality in all fifty states. On the thorniest issue of immigration, Harris has co-sponsored -the DREAM Act-which gives the DACA recipients a permanent path to citizenship. In addition, Harris travelled to Mexico, to meet Mexican officials in the fight against transnational criminal organizations and human traffickers.

In her fight for the well-being of the American people, Harris tackled the subprime mortgage crisis. It was triggered by a large decline in home prices after the collapse of a housing bubble, leading to mortgage delinquencies, foreclosures, and the devaluation of housing-related securities. “[T]he country’s largest banks…had been illegally foreclosing on people’s homes since 2007, using a practice that became known as robo-signing.” California State, led by Harris, joined the multistate investigation into the banks. After a prolonged battle, the banks finally settled offering about $20 billion in relief to homeowners. In another effort to protect the American people, Harris made the fight against opioids one of her top priorities. The pharmaceutical manufacturers have been raising prices of opioids without any compunction.  “We went after pill mills, and shut down so-called recovery centers that were overprescribing, leading to patient deaths.”   She contends that “at its core, this is a public health issue and not a criminal justice issue.”

As part of her platform as Candidate for Vice President of the United States, she, along with Joe Biden, proposed many integral and crucial changes to out currently implemented systems. First, Harris is deeply in favor of The Affordable Health Care Act (ACA). She would like to see Medicare for all and lower prescription drug prices. Harris stresses the need for lowering prescription drug prices, training more home health aides and more mental health practitioners. Second, Harris has recognized that among a large number of corporate predators are for-profit colleges that promised a great education and a great future later. These colleges conned vulnerable students and gullible investors. Harris successfully sued Corinthian Colleges. She has been a strong vocal supporter of net neutrality to particularly help students. She would like to make debt-free college a reality. Finally, Harris touches upon the current climate change crisis. She supports climate change initiatives, and rejoining the Paris Agreement.  Harris is intent on  improving our nation’s infrastructure, providing broadband internet in rural areas, being smart on cybersecurity and election security, investing in quantum computing, dealing with accelerating inequality, and so on.

In returning full circle and reflecting upon her personal life, Harris recounts several happy memories and joyous occasions with her family. Harris married Doug Emhoff,  an American lawyer, on August 22, 2014, in Santa Barbara, California. Harris is a stepmother to Emhoff’s two children, Cole and Ella, from his previous marriage to Kerstin Emhoff. Harris and Kerstin remain close friends. Harris is also a great mother to Cole and Ella and considers them as her own children. Kamala was particularly close to her mom, saying “I love her so much. And there is no title or honor on earth I’ll treasure more than to say I am Shyamala Gopalan Harris’s daughter. That is the truth I hold dearest of all.” Motivated and inspired by the love she shares with her mother, Harris also helps young women by inducting them into the Role Models Club. “There was something that my mother used to say that I always held close. “You may be the first. Don’t be the last.” My mother had gotten to where she was because of the help of mentors. I had gotten to where I was because of mentors, too. And I intended to be a mentor to as many people as I could during the course of my career.”

Harris concludes her memoir by exhorting everyone to stand up and participate in the fight for a bright present and a future. “My daily challenge to myself is to be part of the solution, to be a joyful warrior in the battle to come. My challenge to you is to join that effort. Let’s not throw up our hands when it’s time to roll up our sleeves. Because years from now, this moment will have passed. And our children and our grandchildren will ask us where we were when the stakes were so high. They will ask us what it was like. I don’t want us to just tell them how we felt. I want us to tell them what we did.”

Harris’s first book “Smart on Crime: A Career Prosecutor’s Plan to Make Us Safer” published in 2009, explores her philosophy and ideas for criminal-justice reform. Her memoir, The Truths We Hold, and another memoir rendered in picture-book form for kids, “Superheroes Are Everywhere”, were published in 2019.

The Truths We Hold is an emotive, compelling, and uplifting memoir of Kamala Harris and is a must-read for all who believe in freedom and justice.

'The Lowland' : A labyrinth of complicated relationships

Does it include story about why she and her father are not on talking terms?