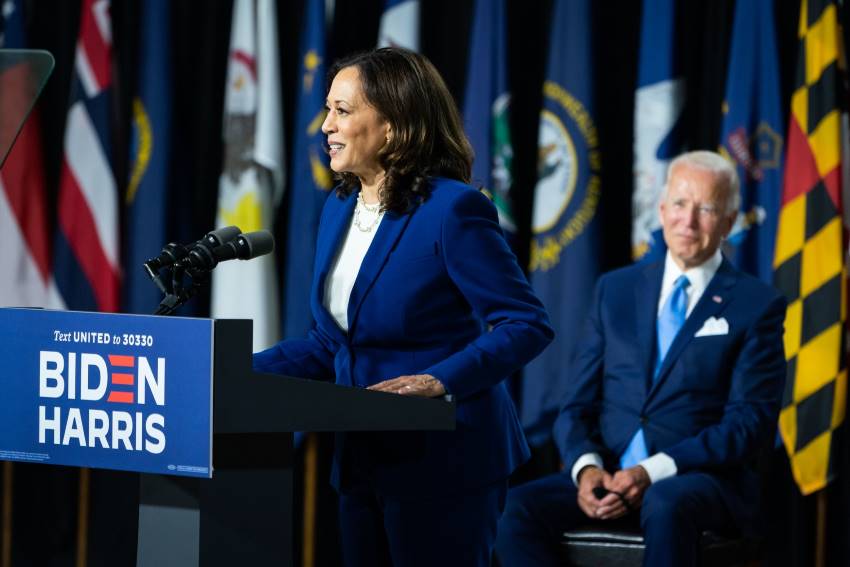 New York, Aug 20 (IANS) Invoking powerful memories of her mother, “the most important person” in her life, California Senator Kamala Harris made history as the first black and South Asian woman to accept a spot on a major US party’s presidential ticket, a moment that set off wild celebration across communities of color and especially women in the country.

“Oh how I wish she was here tonight, but I know she’s looking down on me tonight”, Harris said of her mother, accepting the Democratic Party’s vice presidential nomination on Wednesday night at the party’s ongoing national convention at the Chase Centre in Wisconsin.

Harris’ mother Shyamala Gopalan, from Tamil Nadu, India, died more than a decade ago but she remains a powerful force in the Senator’s life.

Gopalan found repeated mention in one of the most important speeches of the California Senator’s political life.

Harris spoke about the values her mother taught her: “To walk by faith, and not by sight, and to a vision passed on through generations of Americans, one that Joe Biden shares.”

Harris’ parents met as doctoral students at the University of California, Berkeley, in the early 1960s.

Citing her heritage, Harris in her address said: “…That I am here tonight is a testament to the dedication of generations before me.

“Women and men who believed so fiercely in the promise of equality, liberty, and justice for all.

“I accept your nomination for Vice President of the United States of America.”

Apart from headlining the start of a bigger role in national consciousness, her elevation in American politics today could well mean she likely takes her spot as the party’s most influential politician in 2024, should Democratic presidential candidate Joe Biden win this election and choose to retreat from active politics in 2024.

Pelosi praised Harris as “brilliant” and the “vice president we need right now”.

Harris first made a surprise appearance early during the Wednesday programming’s opening moments and called on Americans to think through their voting day plans, and giving them a series of simple digital to-dos to overcome the obstacles posed by postal slowdowns.

“So each of us needs a plan, a voting plan,” she added.

Obama spoke ahead of Harris and handed off to her sister Maya, niece Meena and step-daughter Ella Emhoff who introduced the Democratic Vice Presidential nominee on a historic night, their voices thick with emotion.

With barely 76 days to go before the presidential election, America leads the world in coronavirus cases and deaths.

More than 5 million have been infected by the virus and more than 172,000 Americans are dead because of it.

For three straight days, Democrats at the convention have slammed President Donald Trump’s coronavirus response as scary, disastrous and self serving.

“The constant chaos leaves us adrift, makes us afraid…it’s a lot,” Harris said, speaking of Trump’s mismanagement of the virus response.