The production, scripted and directed by Revathi Ramachandran, had music by Lalgudi G.J.R. Krishnan, sound production and design by Sai Shravanam and lighting by Murugan Krishnan.

The production showcased ganga in all her glory, her natural landscape, the mythology, folklore, the history, the magnificent past or the current day pollution that looms over the sanctity of the sacred river. The event raised $68K for two AIM for Seva projects, Chatralayas adopted by Atlanta chapter and Krupa Home, meant for adults with disabilities.

The All India Movement (AIM) for Seva, initiated by Pujya Swami Dayananda Saraswati, is an integrated development program, reaching out to rural children across 15 Indian states. Addressing rural education challenges in India, such as commute to schools, domestic pressure or lack of extra-curricular activities in education, AIM for Seva offers Free Student Homes (FSH) or chatralayas. A student home empowers kids to learn by providing them a place to live close to their schools, with a clean environment, nutritious food, schooling needs, value-based education with extracurricular activities. Other initiatives of Aim for Seva include primary healthcare through hospitals, clinics and mobile medical units, rural women empowerment programs and community training across villages to help develop self-sufficient societies.

The Atlanta chapter led by Eashwar Money has adopted four chatralayas in Karnataka, AP, TN and Gujarat providing for 115 students. The fundraiser each year aims to provide for these students with a goal of 51K ($450 annually per child). The Ganga show raised $45K for the chatralayas. Additionally, Money made a pitch forAtlanta to raise funds for one of the 3 Floor building for AIM for Seva Krupa Home, that costs $60K.  $23K was raised towards Krupa home at the event instantly, just as Money concluded his pledge. “I’m going to try very hard to realize this goal before the end of the year” said an earnest Money.

“Transparency and impact are the driving forces of AIM for Seva,” said Nithya Narasimhan who welcomed the audience. Anusha Goda rendered the invocation composed by Swami Dayananda Saraswathi. Chandrika Chandran of Natyanjali Academy of Dance introduced the performing team. 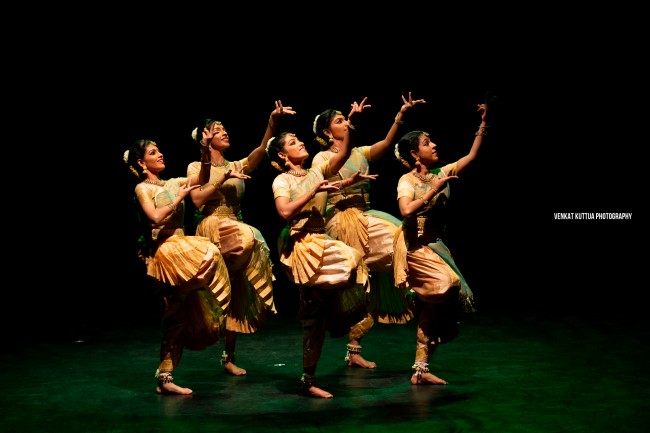 Unfolding with a group dance depicting the flora and fauna, rippling waters, the wildlife, fish, crocodile and sea creatures, the luscious trees bordering the banks, the team of 11 dancers and a sutradhar, (narrator), led by Revathi’s daughter, Manasvini Korukkai Ramachandran, from the prestigious Kalakshetra dance academy entranced the audience, as notes ascended and descended, synching with the milieu of the scene. The portrayal of the river with blue dupatta, the river sounds washing up the shores by dancers clapping with a Tamil song, Rudram chanting, and a Hindi bhajan elevated the experience.

Mythological references to the ganga, including the tale of King Shantanu, who, smitten by Ganga agrees to never question her, and eventually fails to keep up his promise when she immerses her eighth child in the river were depicted. The story of King Sagar who performed Ashwamedha yagna, the impertinence of princes to captivate the yagna horse and Sage Kapila’s wrath, the resulting repentance, Bhagirtha’s penance, Brahma’s advice to worship Shiva, request to Ganga to descend on earth to grant moksha, Ganga’s descent and Shiva capturing her in his matted tresses, loosening a lock to let her flow was creative choreography at its best. 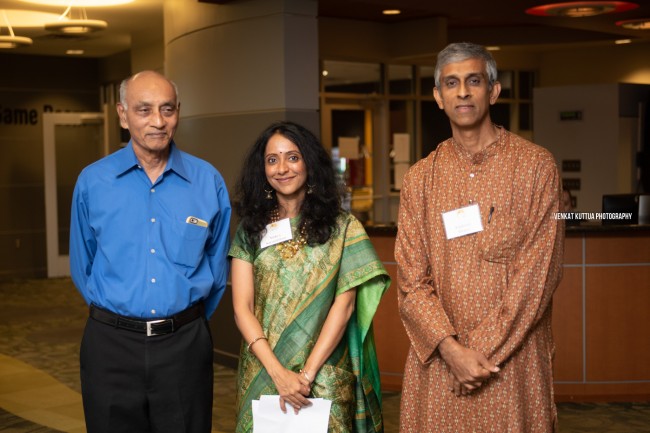 The production picked references from history- of Emperor Akbar preferring Ganga water, as mentioned by Abul Fazal. The quick change of costumes was remarkable.

Concluding with a call to stop pollution, the show closed with vibrant visuals featuring a grand Ganga Aarti that had lamps set afloat a moving cloth that created the impression of the moving river carrying the lamps.

The presentation was a fine amalgamation of Bharatanatyam and Himachal folk dances, classical Carnatic and Gadhwali music, mime, theatricals, and visuals interpreted with ancient and contemporary verses, with performers in muted clothing and terracotta jewelry. The simplicity and sanctity of Ganga was well portrayed and the message to maintain her purity got a standing ovation from the audience.