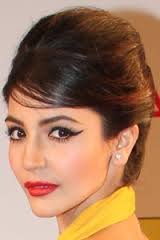 Mumbai, Feb 11 (IANS) Actress Anushka Sharma, who is being talked about for her fuller lips, denies going under the knife for the new look. She attributes her changed looks to a temporary lip enhancing tool for her role in the upcoming movie “Bombay Velvet”.

The speculation started after Anushka, who made her Bollywood debut with “Rab Ne Bana Di Jodi”, appeared on “Koffee With Karan”. 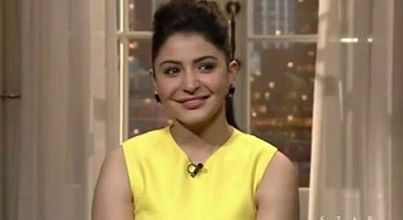 “…Lately there has been a lot of talk about me in this particular episode of ‘Koffee with Karan’. Mainly regarding my lips. I am here to just convey what I have to say regarding the same. I am talking about it only because this story has taken a scary direction and things have been ‘blown out of proportion’ (pun intended),” Anushka tweeted Monday night.

“For a short while now, I have been using a temporary lip enhancing tool and that along with make-up techniques (I have learnt over the years) is the reason why there might be a change in the appearance of my lips.

“…Let me assure everyone that I have by no means gone ‘under the knife’ or done any kind of ‘plastic surgery’ or undergone any intrusive procedure. This was my decision and was done for the sake of my look in my upcoming film ‘Bombay Velvet’, a period drama where I play a jazz singer in the 1960s-1970s. And it was taken from the referencing of that time,” she added.

The “Band Baaja Baaraat” star further said that her changed looks on the show “is due to lot of factors put together” and not just her lips, and she doesn’t think that she was at her best in terms of her looks.

She said that she is setting the record straight once and for all.

“To put the current conjecture and reportage straight once and for all – I do not believe in plastic surgery or any other means of unnatural permanent changes to the body. I do not support it or stand for it or recommend it,” she posted.

The actress gets support from her contemporaries Sonam Kapoor and Alia Bhatt.

Sonam tweeted: “Kudos to Anushka Sharma for addressing unfair criticism head on… have always admired her as an actor and now I definitely admire her as a person.”

Alia posted: “Way to go Anushka Sharma. People are dealing with a strong girl here so say what you want… nothing is bringing her down.”

Karan Johar, host of “Koffee With Karan”, also praised her.

“Anushka Sharma is a powerhouse of talent and the downside of social media cannot and will not take away the core of her creative existence,” he tweeted.