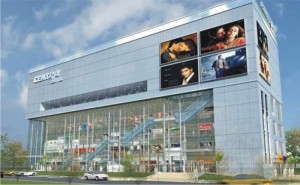 Chandigarh, June 30 (IANS) Here’s a classic misnomer. It’s called the Chandigarh Industrial Area but there are no noisy factories, no smoke billowing out of tall chimneys and no trucks lined up on pot-holed roads. Instead, there are swanky malls with multi-screen theatres, luxury car showrooms, an ever-increasing number of hotels and other flashy outlets. In fact, it’s THE new address in town.

With the union territory’s industry having failed to flourish in the five decades of the city’s history, the Industrial Area is fast becoming the newest destination for big ticket investment for shopping malls, hotels and other commercial establishments.

Though two malls with multi-screen theatres and over a dozen hotels were already operational in the area, the recent opening of the Elante Mall, an L&T Realty enterprise, has started attracting crowds in large numbers. The mall, arguably the biggest in the region and spread over some 16 acres, has brought some of the best known international and Indian shopping brands to the city. It also has multi-screen theatres, an upcoming hotel, office spaces and more.

In and around the other malls, the best luxury brands of cars – from the top-end Rolls Royce to BMWs, Audis, Mercedes, Jaguar-Land Rovers and others – rub shoulders.

“It is a good thing that the industrial area’s character is changing with malls, hotels and other good things. These go with the modern and young look of Chandigarh. Anyway, no one has ever heard of any big names of the industry from the city. But industry has flourished in neighbouring Punjab, Haryana and Himachal Pradesh,” said Ritesh Malhotra, a software professional.

With people from the city and nearby areas of Punjab, Haryana and Himachal Pradesh coming in big numbers to the malls and hotels, the industrial area, which was never meant to cater to so many people and vehicles, is already feeling the pressure.

“Parking space inside the area being limited, hundreds of cars can be seen parked on the roads outside. This leads to chaos, traffic jams and other problems. The roads in the area are not wide enough. The traffic police can never be seen to manage traffic. It seems that the (Chandigarh) administration gave permissions for the malls and the like without bothering to put the other infrastructure in place,” entrepreneur Puneet Bhalla told IANS.

Even though the new activity in the industrial area has been generally welcomed by most people, they add a word of caution too.

“Chandigarh’s charecter is changing according to the need of the hour. Known for its service sector, lots of commercial hubs with malls, theatres, hotels and car showrooms have come up. But excess of everything is bad. Chandigarh should be known as edu-city, solar city, planned city but not only as a mall city, or a hotel city,” educationist and chairman of Aryans group of colleges Anshu Kataria, who is also former president of the Chandigarh Management Association, told IANS.

For now, the latest shopping address in the city has taken the crowds away from Chandigarh’s traditional popular Sector 17 and 22 shopping areas.

“Till a couple of months back, getting into Sector 17 and 22 and finding parking space used to be a nightmare. Now, the parking areas seem quite free,” college student Priya Singh said.

A momentous week of US decisions impacting Indians