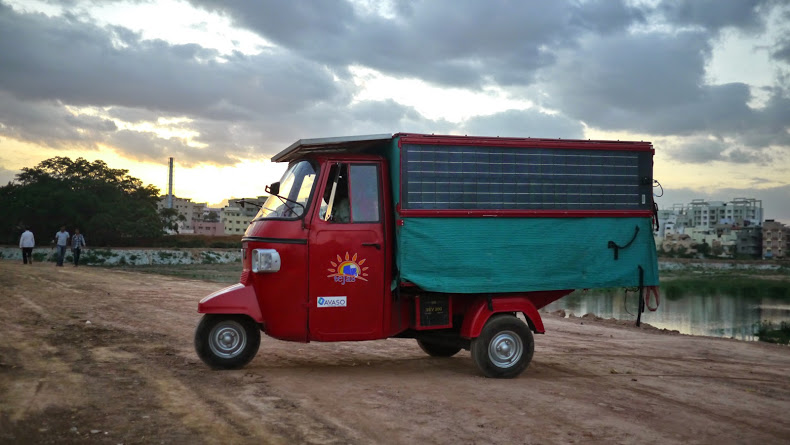 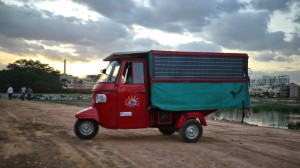 Bangalore, July 28 (IANS) An Indian techie will soon embark on a trans-national expedition riding on a self-built solar-powered autorickshaw to Britain to promote a sustainable low-cost alternative transport solution and check air pollution in towns and cities across the country.

“The objective of this 10,000 km (6,250 miles) adventure through 10 countries is to demonstrate the environmental and economical benefits of using a solar-powered autorickshaw, a popular transport mode in South Asia used for commuting by ordinary folks,” 33-year-old engineer-turned green activist Rabelli Naveen told IANS here.

Though Naveen initially planned to drive the three-wheeler prototype through Pakistan and Afghanistan to Iran on way to Britain via Turkey, Bulgaria, Serbia, Hungary, Austria, Germany and France, he will sail with the vehicle by ship to Iran in the first leg of the expedition, as he does not have a visa from the two neighbouring countries.

“As visa is issued on arrival in rest of the countries, I will drive from Teheran to Paris through Istanbul, Belgrade, Zagreb, Budapest, Salzburg and Munich and use a ferry to reach London in over three months, travelling about 100 km a day,” Naveen said.

After graduating in B.Tech from Hyderabad a decade ago, Naveen flew to Australia for masters in electronics and worked in Melbourne as a product development engineer long enough to acquire its citizenship and an Aussie passport to travel across countries without hassles.

“Apart from difficulty in getting a visa, I have been advised that it is unsafe to travel on road through Pakistan and Afghanistan for security reasons. Hence, after driving to Mumbai from here, I will board a ship with the solar auto ‘Tejas’ to reach the Iranian port Bandar Abbas in five days and resume the journey on land,” Naveen said.

Raoul Kopacka, 26, an Austrian automobile engineer and a videographer, will accompany Naveen on the long trip to make a documentary of the expedition to show how road worthy and safe is the solar powered auto with zero emission.

“We look forward to meeting lots of people with diverse cultures and from various walks of life to understand their efforts towards a sustainable lifestyle,” Kopacka said during a test-drive in the ‘tuk tuk’, as autos are known in Southeast Asian cities.

Naveen fancied embarking on this mission inspired by an Austrian team, which drove across the world in a solar powered taxi during 2008-09.

“We plan to share our experiences and learning from the long journey with others online so that the data can be used to create awareness for switching over to renewable energy from non-renewable energy like fossil fuels,” Naveen said.

The duo plan to hit the road in the next six months after getting fitness certification for Tejas, regulatory approvals and funds (Rs.25 lakh) through sponsors, corporate and organisations involved in promoting sustainable solutions for protection of global environment.

“We are in the process of getting the retrofitted auto certified by the Automotive Research Association of India and clearances from the road transport organisation, as it has logged about 2,000 km on test drives to test its vital parameters and assess its fitness with endurance to ride on electric power and solar energy,” Naveen said.

Though a city-based automobile firm (Mahindra Reva) rolls out electric cars, absence of a similar vehicle in three-wheeler prompted Naveen to buy a second-hand Piaggio Ape diesel auto and modify it into a battery operated vehicle at a cost of Rs.3.4 lakh, with six panels fitted on its three sides, including four on top for solar charging.

“We had to rebuild the auto from scratch, replacing its diesel engine with a battery operated engine and re-wiring to charge it with electric and solar power,” Naveen said.

When fully charged with electrical energy in eight hours and solar power in five hours, the 650 kg auto travels 105 km non-stop at 45 km per hour.

Barring the solar panels, which are from the US, the rest of the vehicle is indigenous. Its dashboard is fitted with a GPS (global positioning system) to navigate through the circuitous route and store data, a voltmeter to indicate battery power, a thermostat to record temperature, a speedometer to log distance covered and a stereo music system.

“The cabin in the front has legroom for just two of us to sit through the long journey, while the rear portion has space enough to keep spares, tools, personal luggage, water cans, sleeping bags and packaged food,” Naveen added.

Baby of the Month- Rithika Arun