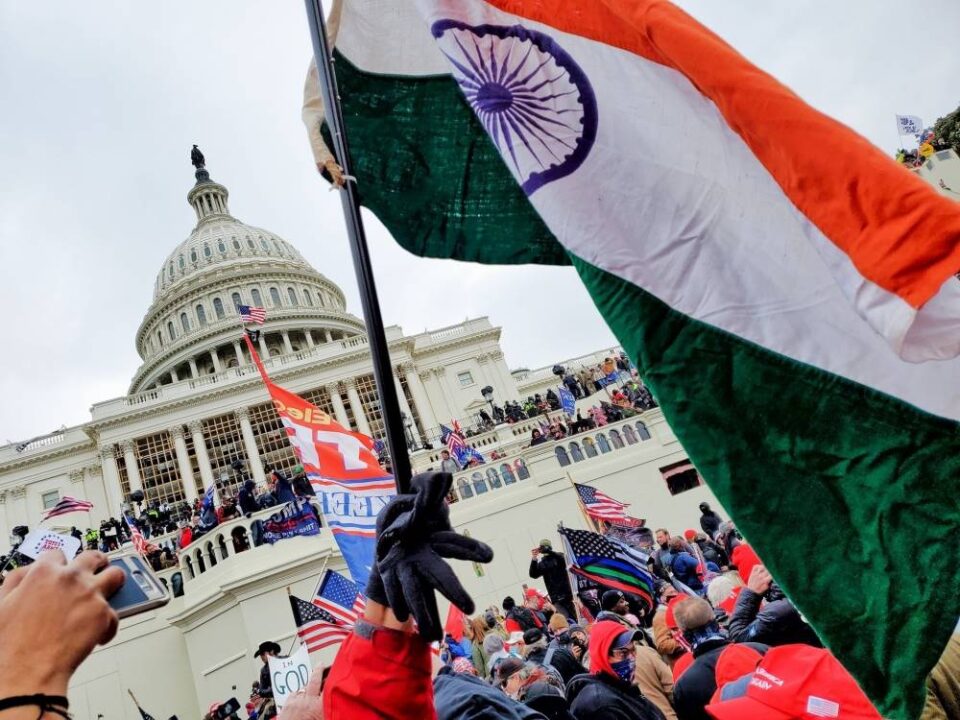 New York, Jan 8 (IANS) An Indian flag was seen amid a sea of American and Trump flags in a footage, as well as images, of the violent protests at the US Capitol that went viral on social media.

An Indian-American Republican political activist, Vincent Xavier, tweeted on Thursday pictures of the flags India, South Korea and Iran at the protest.

The Iranian flag was from the pre-Islamic revolution era.

His tweet said: “American patriots – Vietnamese, Indian, Korean & Iranian origins, & from so many other nations & races, who believe massive voter fraud has happened joined rally yesterday in solidarity with Trump. Peaceful protestors who were exercising our rights.”

On his Facebook page, Xavier posted a video of a person at the protest with an Indian flag.

Many people who commented on the post criticized him for associating India and Indians with a protest that turned violent.

One of the posts said: “It is your right to protest at Trump Rallies, You have no right to carry an Indian flag at Stop the Steal Trump rally which ended in Storming the US Capitol.”

Another picture from a Twitter user showed six people standing in front of the Federal Bureau of Investigation (FBI) headquarters as if posing for a picture with one of them holding what appeared to be a furled Indian flag on a pole.

Another person in the group held a sign that said “Indian Voices for Trump”, and others had an American and a red Trump flag and signs that said “Asian Pacific Americans for Trump” and “Stop the Steal” — a reference to the President’s claims about election fraud.

The people seemed like they could be of Indian descent and some appeared to be in their 20s or 30s.

They could not be identified nor could it be ascertained if they even participated in the protest.

There was no indication on the website of Indian Voices for Trump that it backed the protests.

The organization had campaigned for Trump in the run-up to the election.

An Indian-origin journalist who works for a public radio station tweeted about the protest participation: “Lest you think this was an all-white mob, there are Indian-American supporters of the president who took part like my source Hemant, a businessman from Iselin, New Jersey. He sounded ecstatic about today’s events.”

The journalist also posted a screenshot of an exchange with the person identified only as Hemant in which he said: “I am here. Thousands and thousands of people are here. They stormed the Capitol building. I witnessed…”

The Indian flag first surfaced in a video posted by the Alejandro Alvarez, the digital editor of the Washington news radio station WTOP and was only seen among the crowd standing back from the Capitol on the street while much further ahead some people were climbing on the building’s steps.

The person holding the flag could not be seen in the video.

An Indian-American Attitudes Survey (IAAS) poll published in October 2020 showed that 22 per cent of registered voters from the community planned to vote for Trump, while 72 per cent were for Democratic Party candidate Joe Biden.

Going by the IAAS poll, the backing for Trump had increased by 6 per cent compared to his support level shown in the 2016 Post-Election National Asian American Survey.