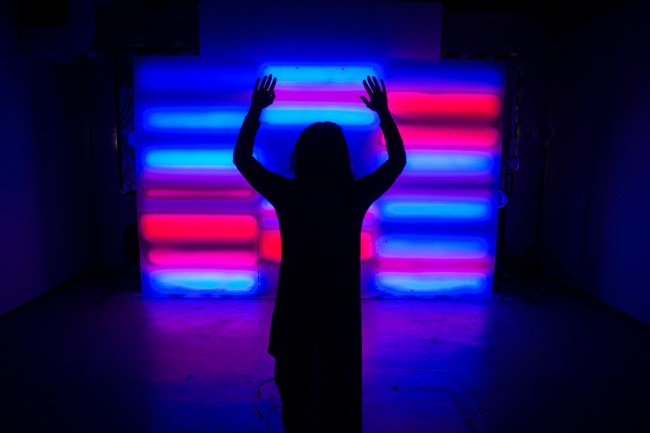 New York, June 5 (IANS) An Indian-American digital artist and educator has produced an interactive multimedia installation to explore the problem of killings in police gunbattles in the US which result in at least two deaths every day according to a media estimate.

The “Hands Up” digital exhibit is about “generating empathy”, said Roopa Vasudevan, who created it with fellow Pakistani American artist Atif Ateeq.

“Obviously, there is no way to fully understand what a confrontation like this is like unless it happens to you,” Vasudevan said. “We hoped to allow our visitors to get a degree of understanding of how charged and emotional the situation actually is.”

“Hands Up” simulates the high-adrenaline gunbattle situation in a cacophony of shouts, commands and sirens in a dark scenario ripped by sudden flashes of blue, white and red police car beacons, invoking a sense of dread and foreboding.

As the intimidating voice of the law orders “Hands up,” and a visitor responds, bursts of light simulate gunfire and sounds of explosion ricochet. The viewers are plunged into the virtual reality of split second decisions that become the arbiters of death and life.

It was on display recently at Flux Factory, a community of artists in the city’s Queens borough, an area that is home to a large number of Indians and South Asians.

Asked if she saw police brutality as an issue for Asians and Indians in the US, Vasudevan said: “Absolutely.”

“This is an issue of an imbalance of power,” she explained. “Obviously, most of the focus in the media recently has been on interactions with African American men, but it’s worth noting that this speaks to a larger story of how minorities are looked at and treated in this country.”

In February a visitor from India, Sureshbhai Patel, was left partially paralysed after being roughed up by police in Alabama, although he was not shot.

Last February, an Indian American who had served in the US Army in Iraq returned home to California only to be shot dead by police. Police claimed that Parminder Singh Shergill had charged at them with a knife, but eyewitnesses asserted that he was unarmed.

The Washington Post reported recently that its analysis found that 385 people have been killed in police shootings so far this year till the end of May – or more than two every day.

A disproportionate number of those killed were minorities. Among the unarmed victims, two-thirds were African Americans or Latinos, the newspaper said. When adjusted for proportions in the population in the areas of shootings, African Americans were three times as likely to be killed as other ethnic or racial groups, its analysis found.

Vasudevan said that after grand juries refused last year to indict the white police officers involved in two separate incidents – the choking death of an unarmed man, Eric Garner in New York, and shooting death of a teenager, Michael Brown in Ferguson, Missouri – she and Ateeq wanted to see “how we could productively contribute to the conversation and movement for change.”

“As artists, both of us strongly felt that generating empathy for someone placed in the situation of being confronted by the police was key to the path to understanding, and that the best way to do that was by creating a large, immersive art piece,” she said.

Facing mounting criticism over police conduct, Pat Lynch, the head of the New York City police union, denounced the exhibit, saying “it perpetuates a falsehood about police officers and their use of force”.

The atmosphere of chaos and tension created in the exhibit, however, also illustrate the conditions that police operate under.

Vasudevan, denying it was anti-police, said: “It’s not such a cut and dry thing, so-and-so was right and so-and-so was wrong. There’s a lot happening in the moment. It’s our hope that our work can add to the discussion of what can be done to change things.”

Vasudevan has been a director for MTV’s Emmy award-winning series, “True Life,” and her digital work has been featured by the American Museum of Natural History, National 9/11 Museum, and The New York Times. She also teaches at Fordham and New York universities.

Asked about artists of Indian and Pakistani descent working together, she said: “The piece was more about being a minority in the United States than anything else. We didn’t necessarily keep the specifics of our backgrounds in mind when collaborating.”