Dr. P. V RAO’s wife and daughters share their personal memories of the gentle, creative genius, who is considered one of the principle architects of the Atlanta Indian community. Dr Rao would have turned 81 this September. BY VEENA RAO. 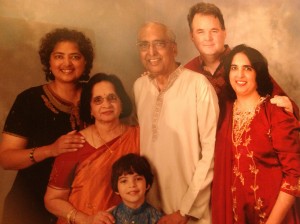 Atlanta, GA: “His creativity and presence is all around the house,” says Lakshmi Rao, of her late husband, Dr. P.V. Rao. “It makes me wonder how one man can have so many talents.”

She walks this reporter through her cozy little home, then down into the basement and the backyard. His creations are everywhere- in every room, on the walls, in the garden, in the basement that he finished on his own. There’s a coffee table in the family room that he fashioned out of myrtle wood, a carom table that he made from scratch for family tournaments, several paintings on the walls, hands sculpted idols of gods and goddesses, a large ‘Om’ sign that he had made for the Indian contingent to the Atlanta Olympics in 1996. In the basement is a large shiva lingam, which on closer examination, is actually a 1000 little lingas molded out of cement, and arranged to make one magnificent whole. A walk into the garden is even more revealing.

“I didn’t like to walk on the grass,” reminisces Lakshmi Rao. “So he went to Home Depot, bought bags of cement, made a wooden mold and shaped 50 blocks to create a pathway in the middle of the long garden.” The blocks are etched with memories. There are hand imprints of friends’ children, other blocks have names. With the leftover cement, he had molded Telugu alphabets and an ‘Om Namah Shivaya” to lay around the garden. 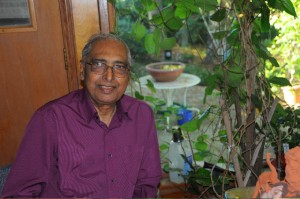 Theirs has been an open house for everybody, irrespective of culture and background, for many many years. The house reflects the philosophy of Dr Rao, a gentleman who always had time for others, something that all the children who grew up calling him Rao Uncle will vouch for.

Dr. Pemmaraju Venugopala Rao, who passed away on Christmas Day last year, is considered one of the principle architects of Atlanta Indian community. Dr Rao was a professor of Nuclear Physics at Emory University. At the behest of the Dalai Lama, he helped establish the Emory-Tibet Science Initiative (ETSI). He was also a poet, artist and a journalist. He was a mentor and a fatherly figure to many institutions and youngsters in the US, and is remembered by many as a founding member of India American Cultural Association (IACA) and its first president.

The basement shelves hold memories of the early IACA days. A 1975 edition of the Atlanta Journal Constitution has an extensive cover story on the Indian community in Atlanta. The feature is rich with photos of the dance ballet ‘Ramayana’, a fundraiser for IACA, in which around 30 families participated. The ballet was a huge success, and even prompted Mayor Maynard Jackson to declare May 31st as Ramayana Day.

“He had to have brochures at every event,” says Rao, as an aside. “Even when our daughter Nalini got married at IACA in 1986, he had brochures.”

Lakshmi Rao thinks back to the times when the community was so enthusiastic about raising funds to build the IACA building. Every weekend, thousands of samosas were made in homes and sold at Piedmont Park. The IACA building was eventually built and inaugurated in the mid-80s.

“I’d love to go back to those days,” says Rao, nostalgically. “We were blessed. We had friends of different cultures and learned so much from each other.”

Daughter Nalini Koch remembers her dad as an encouraging, supportive and a very positive force in her life. “He was a gentleman who always looked for the good in people. He was inclusive of all, no matter their standing or beliefs and I cannot remember a time when he passed judgment on someone. I could always go to dad in times of trouble and he would quietly guide me through those challenges,” she says, adding, “He was my biggest fan growing up, as I learned to play the guitar and sing, eventually producing my own CD. When I played the guitar sometimes at home, he would break out the tabla (or the table) and drum along side me with his fingers. He actually had an excellent beat!”

For younger daughter Saleen Dakin, her dad was always her champion. “I cannot remember a decision I made without having input from him, but he would never really tell me what to do.  He would simply listen and offer the pros and cons and leave the decision to me.”

“I know people remember my father as an intellect and leader and wise scholar,” she adds. “But my father was also so funny.  He loved to laugh at jokes, funny movies, even pranks that we would do on each other at home.  He would sometimes laugh so hard he would almost lose his breath and he would have tears in his eyes.”

The daughters talk about their favorite memories of their father.

Nalini says her dad had an adventurous spirit and never turned down the opportunity to seek out new things. “Before my sister was born, mom, dad and I spent the first 10 years of my life traversing the United States in our green Dodge Lancer. I have so many fond memories of dad hiking through lava beds, giving potato chips to a bear at Yellowstone and narrowly missing a tornado in Kansas by turning around on the highway and driving like crazy back to the Howard Johnson’s.”

But her favorite memory is of her and Saleena videotaping an interview of their parents in 1988, asking them questions about their childhood, and their feelings about family.

“When I won the title of Miss Lakeside, queen of my high school, Dad said that at that moment, he no longer had to worry about what I would become and that he was proud of all I had accomplished. It wasn’t easy raising an Indian girl in the South and this was somehow validation that we would not only survive, but realize dad’s dreams of becoming a part of the American culture while maintaining our cultural heritage,” Nalini says.

Saleena’s favorite memory is of her dad bringing home a special book called “I can read”, and sitting with her everyday, reading it. Later, when she was in high school, they read Shakespeare together and he helped her understand it better.

When her now husband Shaun asked her father’s permission to marry her, instead of simply saying yes like most fathers do, he told Shaun he would have to get back to him in a few days!  “Poor Shaun was in a panic,” laughs Saleena. “In the end, it turned out my father took this request very seriously and spent several days talking with me to make sure this was what I wanted (of course I did).  He told me he wanted to make sure that his baby daughter was well cared for-and I am!  He let Shaun off the hook 2 days later.”

Seeing her father hold her son, Joseph Pemmaraju Dakin, when he was born and dance around the living room with him to comfort him when he was crying and then whispering the Gayatri Mantram to him at his thread ceremony many years later are the best memories of all for Saleena.    “My father loved to videotape and take photos of us (he was a good photographer).  He taught us the value of preserving memories,” she adds.

Lakshmi Rao and her two daughters recently went back to Emory to clean Dr Rao’s office. “When I walked into dad’s office with the daunting task of clearing out forty plus years of his life, I was overwhelmed,” says Nalini. “But as I sat and started going through all his papers and files and collections of books, I felt a wave of peace and calm wash over me. I knew he was there, giving me permission and telling me it was going to be okay,” says Nalini.

“Emory is a special place for me.  I was born there.  I went to college there.  My Christian wedding ceremony was there.  Also, when I was growing up, I used to go to camp all summer there.  It was like going back home, in a sense, because I had spent so much time there,” says Saleena. “It was bittersweet, and brought back a flood of memories.”

While they had always known that their father was a very curious and creative person, it was not until they saw the things he had saved that they realized the depth and extent of his curiosity and thirst for knowledge. The two sisters had a good laugh when they discovered a small bottle, shoved back behind some other boxes on a top shelf, with a “Danger Radioactive Material” label on it. “Now what was he going to do with that,” laughs Nalini.

And how would Dr Rao’s daughters like their dad to be remembered?

“I think dad would be pleased at how he has already been remembered,” adds Saleena. “Three words come to mind as to how I would like the community to remember him. Collaboration, creativity and curiosity.”

She elaborates on the three ‘Cs’.

Community:  My father spent so much time helping to build this Indian community.  He wanted everyone to collaborate rather than be divided.  When individuals or organizations work together, they can be so much more effective! Politics should be put aside to remember the reason we come together as a community.

Creativity:  This principle was so important to him.  He truly believed that being creative should be a way of life and this is how new ideas are born and how people succeed.  Everyone should take the time to tap into their creative side.

Curiosity:  My father loved to learn.  He read books all the time and could speak on so many subjects.  I think it is so important that we take this lesson and constantly try to learn more and improve ourselves by gaining knowledge.

Worried about Travel Medical Insurance Prices for Visitors Coming to the USA? 5 Tips on How to Save!