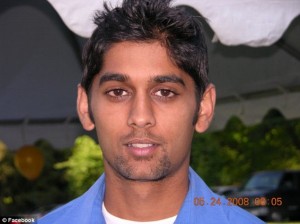 Washington, Oct 15 (IANS) A 24-year-old Indian-American man has been charged in the killing of a 23-year-old Georgetown University law student who was his high school friend, according to media reports.

Rahul Gupta, 24, is being held on $2 million bond after a night of drinking and birthday celebrating ended in a bloody stabbing of Mark Edward Waugh Sunday morning inside a high-rise apartment in Silver Spring, a Washington suburb in Maryland, the Washington Post reported.

Gupta was pursuing a master’s degree in biomedical engineering at George Washington University. Waugh was in his first year of law school.

According to police, a woman called 911 Sunday at 3.25 a.m. When police arrived at the apartment, they found Waugh and Gupta inside. Police say they found Waugh suffering from cuts and he was unresponsive. It was later determined he was dead.

Both Waugh and Gupta attended Langley High School in McLean, Virginia, where they took several advanced placement and honours classes together, the Post said.

Waugh was in an after-school robotics club. Gupta played on the varsity tennis team.

Arrest records in the case paint a picture of several friends going out Saturday to celebrate Gupta’s birthday, the newspaper said.

But things later appear to have turned to alcohol-fuelled confusion and – at least based on the perception of one member of the party – a jealous rage, it said.

“I walked in on my girlfriend cheating on me,” Gupta told the police, according to the charging papers cited by the Post.

“My girl and my buddy were cheating. My girl was cheating with my buddy. I walked in on them cheating and I killed my buddy.”

Gupta later told a police officer he’d made a mistake and added that “he tried to kill me, though”, the arrest records cited by the newspaper recount him as saying.

The Dark Truths about the Desi Party Scene