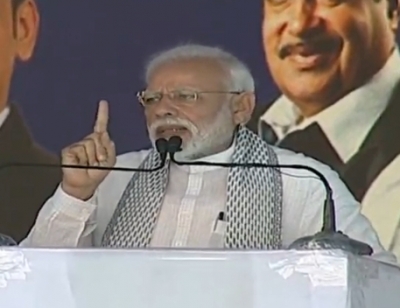 New Delhi, Feb 16 (IANS) In the aftermath of the terror attack by the Pakistan-based Jaish-e-Mohammed (JeM) in Jammu and Kashmir that killed at least 40 CRPF personnel, the government’s strategy for retaliation seems clear – launch an international campaign for exposing and isolating Pakistan for its complicity in terror activities, while taking all domestic and global players into confidence as it prepares for a befitting reply on a military level.

All actions following the dastardly attack indicate that the government’s strategy would be a consensus-based retaliation for which the government has already started talks at different levels as it weighs all options for retaliation.

From the US, China, Russia, Canada, Australia and the European Union to Afghanistan, Israel, Saudi Arabia and Indonesia, countries across the world have come in support of India and expressed solidarity with Prime Minister Narendra Modi.

Just a day after the Pulwama attack, India on Friday started the process of isolating Pakistan on the international stage with Foreign Secretary Vijay Gokhale meeting at least two dozen envoys in the national Capital.

It also withdrew the Most Favored Nation (MFN) status given to Pakistan. According to experts, India’s decision to withdraw the MFN status to Pakistan would adversely impact the neighboring country’s economy.

Finance Minister Arun Jaitley, after a meeting of the Cabinet Committee on Security on Friday, said the External Affairs Ministry would also initiate all diplomatic measures to ensure the global isolation of Pakistan and that India would press with the international community to ensure the early adoption at the UN of the Comprehensive Convention on International Terrorism (CCIT).

This is seen as government’s intention to rally all countries in its support and take them into confidence before giving a befitting reply to Pakistan-based terror fronts. Prime Minister Narendra Modi has already declared that terror groups who perpetrated the Pulwama attack cannot hide and “will be punished” as the security forces have been given a “free hand” to tackle the inevitable.

US National Security Advisor Ambassador John Bolton has already extended support to his Indian counterpart Ajit Doval for India’s bid to designate JeM chief Masood Azhar as a global terrorist. Washington also extended support towards India’s right to self-defence against cross-border terrorism under the 1267 Committee of the UN Security Council.

Doval and Bolton resolved to hold Pakistan to account for its obligations under UN resolutions and to remove all obstacles to designate Azhar as a global terrorist under the UN Security Council Resolution which has already designated JeM as a terror body.

On the domestic front also, the government is making efforts to take all stakeholders into confidence before it takes any action. It called an all-party meeting on Saturday to bring political parties on the same page over the issue so it can put up a united face with the whole nation backing the government in whichever action it takes.

The all-party meeting, chaired by Home Minister Rajnath Singh, passed a resolution condemning Pakistan’s support to terrorism and stating that all parties along with the countrymen stood with the families of the slain CRPF troopers.

The government’s coordinated efforts to expose and isolate Pakistan have already started showing results with Pakistan forced to meet the envoys of five Permanent Members countries of the UN Security Council – collectively known as P-5 – in Islamabad.

It looked visibly on the back foot when Pakistan Prime Minister Imran Khan’s Advisor on Commerce, Razak Dawood, said that Pakistan would take action with great care and would not “overreact”.

The international community has also strongly condemned the attack with US President Donald Trump asking Pakistan to “end immediately” the support and safe haven provided to all terrorist groups operating on its soil even as Pakistan dismissed accusations that it had links with the militants who carried out the attack.

According to sources, the Foreign Secretary met around 25 ambassadors, including the P-5, all South Asian countries and other important partners like Japan, Germany, Korea and others. P-5 comprises the US, Russia, China, France and United Kingdom.

During his meetings with the foreign envoys, Gokhale highlighted the role played by Pakistan in using terrorism as an instrument of its state policy.

“All the heads of missions were left in no doubt about the role played by Pakistan-based and supported JeM in the terrorist attack and our demand that Pakistan ceases forthwith all support and financing to terror groups operating from areas under their control,” said a source.

A JeM terrorist crashed a car bomb into a CRPF convoy in Pulwama district on the Srinagar-Jammu Highway on Thursday, making it the worst ever attack on security forces on any single day since a separatist campaign broke out in Jammu and Kashmir in 1989.

The attack further damaged the already tense India-Pakistan diplomatic relations, with New Delhi saying it had evidence of Islamabad’s involvement in the carnage. Pakistan, however, dismissed accusations that it had links with the militants behind the attack.

The attack has left the security establishment stunned as it created the biggest casualty of security personnel in a single day in peace time.