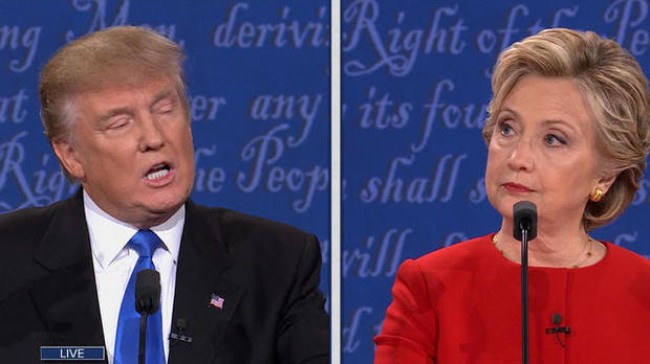 Atlanta, GA: “Know Your Candidates for the 2016 Presidential election” debate forum organized by IAF on October 1, 2016 at Olli Emory University, 6 executive Park,Atlanta was attended by several concerned Indian Americans who are keenly interested in its outcome.

Mr. Dhiru Shah, President of IAF stated at the outset that in order for the American democracy to succeed, it is the paramount duty of all citizens to cast their vote in the forthcoming Presidential election irrespective of their party affiliations.

Mr. Shah presented at length the Pros and Cons of both candidates (Mr. Donald Trump, Republican party & Mrs. Hillary Clinton, Democratic Party) based on the information available from various media and Internet sources.  Mr. Shah explained that before deciding who to vote for, every voter should carry out his/her in-depth analysis of each candidate from all available resources.  He advised the attendees not to depend entirely on the main media reports because most of them twist and spin the news according to their own self-centered agenda.  He also pointed out that they have an Indian American identity even though they are loyal American citizens.  Since most Indian Americans have deep roots inIndiaand follow the traditions and culture of their ancient motherland, they would obviously prefer a Presidential candidate who will try to develop a close friendly relationship withIndia, keeping the long-term interest ofAmericain mind.

Subsequent to Mr. Shah’s presentation, the floor was opened for airing views by the debate participants.  Some of their comments are reproduced below to understand the importance of holding such debates.

Mr. Manhar Valand of Chinmaya Mission stated: “Pros and Cons of both candidates were presented well. Information on Internet press releases express sound bites or views which are often devoid of facts. For all Indian Americans this is not a normal American Presidential election. Selection based on our thinking-inner net requires clear analysis. Before we vote, we should hear from all sides. Discussion that followed was well received.”

Another active debater Mr. Narayan Swamy had this to say: “Thanks to you and IAF for your efforts in putting on this event. It was an eye opener for me. Glad we got educated on the pros and cons of both candidates. I  was immensity benefited from your insights. Discussion on this issue gave me a basis to think clearly about which candidate I need to support. I realized the domestic and International fallout, incase a wrong person is chosen as the president of USA. Let us continue this conversation and hope to hear more view points and come to a right decision before the Election Day.”

Mr. Narender Reddy made a clarion call to Indian Americans to vote for the Republican candidate: “Actually, the Republican Party has a lot more in common with the core principles that we Indian Americans stand for.  We believe in family values, freedom to practice our faith, fiscal conservativeness, education as a tool for success, entrepreneurship, less government, and less taxes.  All the above are core principles of the Republican Party as well.  But unfortunately, 80% of the Indian-American community votes against its own interests by voting for Democrats time and again.”

Another active participant, Ms. Shobha Swamy said:“Mr. Shah presented the pros and cons about both Presidential candidates with a Indian-American perspective. It was a very informative session with a detailed description of the pros and cons of both candidates.” “A very good discussion ensued that brought out several details that we were not aware of”; “on the whole it was a very eye opening session and we now know more details and can make an informed decision.” “It was attended by those who are truly interested in knowing the details from an Indian-American perspective.”

Mrs. Sneha Mehta, a leading Atlanta Hindu leader, conveyed her choice of the Presidential candidate without mincing words: “Thank you for arranging the discussion “Know your US Presidential Election Candidate”. It is important for us as Hindu Americans to know what this election represents. It is not just one political party V/s another party.  In this election you have one candidate who openly snubs and humiliates people of Indian origin and Hindu faith and another who recognizes the contributions of Hindus toAmericaand is willing to work with all the citizens to make America a better country again. I did learn some facts about candidate Hillary Clinton that I was not aware of and also learned some truths about Trump that are purposely hidden and twisted by main American media to create negative impression. I have voted for a Democrat in past but this election I am voting for a Republican candidate.”

Mrs. Shashi Siddhye was very vocal about how the media distorts facts:

“Mr. Trump is criticized as racist and begot but if you check, similar statements have been made by none other than former President Clinton. E.g. in 1992, “makeAmericagreat again” and in 1995 ” illegal immigrants should be deported as they are a burden on our economy.”

Most participants expressed their views that the majority of American media has failed to report pros and cons of both candidates accurately and objectively with the deliberate intent to mislead the American voters.

Winding up the debate, Mr. Shah thanked the management of the Olli Emory University for holding the event in its facility and Mr. Manhar Valand, Ms. Shobha Swamy and Mrs. Sneha Mehta for their help in organizing the program.  He also thanked all participants for making the debate lively, productive and successful.