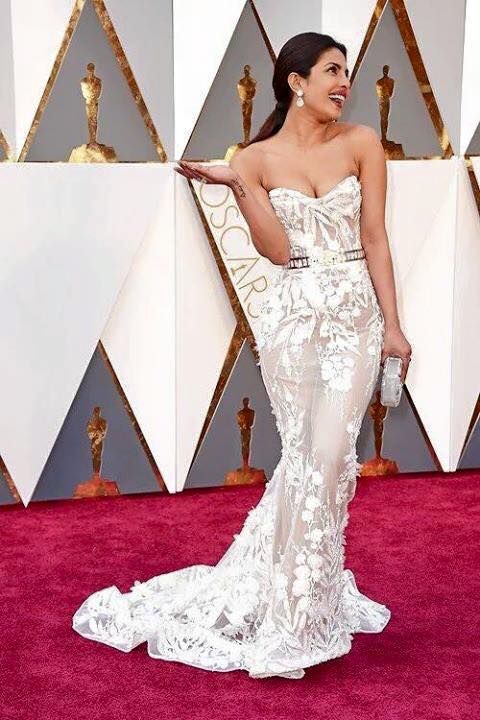 Los Angeles, March 1 (IANS) Actress Priyanka Chopra, who chose a Lebanese designer’s pristine white ensemble for her Academy Awards appearance, says she wanted to turn up at the gala in a pretty, feminine and a “very classic” gown.

The “Quantico” star was one of the presenters at the 88th Academy Awards — which took place here on Sunday — where she looked stunning in a structured cage bustier mermaid dress in white silk tulle adorned with 3D shimmering climbing flowers. The dress was a creation by Lebanese designer Zuhair Murad.

“I can’t be told what to wear. So, when I told Sophia I was like… It has to be a moment… the outfit. That I definitely want. It’s one of the biggest red carpets in the world. It’s super long so, I want to be comfortable for sure. And something that lasts the whole evening…you know it’s not ripping,” she told eonline.com.

The busy actress had to hop from the Oscars ceremony to the after-party and finally to film “Baywatch” in Miami.

“I wanted to make sure that it lasts all night and I wanted it to be pretty and feminine…very classic for the Oscars,” said the “Bajirao Mastani” star.

Now that the Oscars are over, she is excited about shooting for her Hollywood debut.

“‘Baywatch’ is such a big brand… I grew up watching the show. ‘Baywatch’ and ‘Buffy the Vampire Slayer’ were my favourites. When I read the script, it was hilarious. So funny that it will be really something that people will wanna watch,” she said.

How does she handle shooting for TV and film?

“It’s a lot of work. I am flying back and forth because I am going from Montreal to Miami. The show (‘Quantico’) is coming back on March 6. I am very excited about it because when we come back, the second half of the first season is really interesting and of course by the finale, the terrorist will be revealed.

“I am dying to find out too,” said the actress, who plays FBI agent Alex Parish in the American TV show.

“I am perennially physically exhausted, but I am doing so many amazing things and these are such great opportunities and I am a greedy actor,” she said.