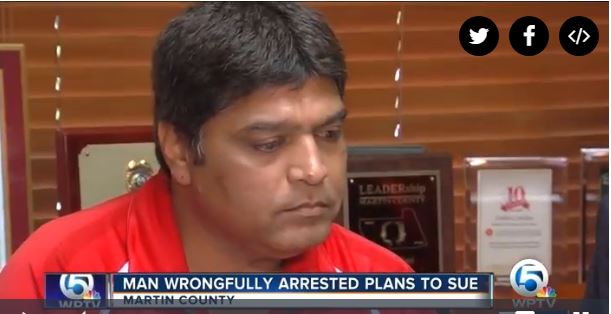 Sandipkumar Patel, 47, said the arrest hurt his wife, Sonal and his two young daughters, and affected his business.

Patel shared his story Tuesday morning, sitting next to his wife and attorney David Golden in Stuart, Florida, reports WPTV.

“On Feb. 25, I thought my life had ended,” an emotional Patel told members of the media. “Shame and dishonor not only fell upon me, but upon my family and our family name.”

“Imagine thinking about killing yourself,” he said, of his humiliation. “This did not have to happen, and there is nothing that can erase the hell my family and I went through.”

Patel’s wife, Sonal tried to console her husband as he detailed the aftermath of his arrest.

“To show her his picture as causing her to believe that was him at that spa is just unconscionable,” he said.

“I was led to believe the man I love and trust with our lives not only broken the trust, but brought shame to our family name,” Sonal said, breaking down. “His face was plastered all over the internet for the world to see. My husband’s only crime was being a Patel.”

The case of mistaken identity stemmed from a four-door Porsche that was registered to a woman with the last name Patel.

It was also co-registered to a man, not named Patel, who was not the man seen on video going into the spa. Officials began researching the car to see if Patel had a husband. Investigators found Sandipkumar when looking up Patels in Martin County. They believed his license photo resembled the man seen in the video, TC Palm reports.

Cops admitted it wasn’t him in the Porsche. Patel says he does not own a Porsche.

Martin County Sheriff William D. Snyder said when they discovered Sandipkumar Patel was mistakenly identified and arrested, they met with him.

“As a result, we notified the media and immediately began actions to pay his expenses and start the process of expunging his misdemeanor arrest record,” Snyder said. “Because Mr. Patel has obtained an attorney and announced his intentions to sue the Martin County Sheriff’s Office, we must limit further public comment.”