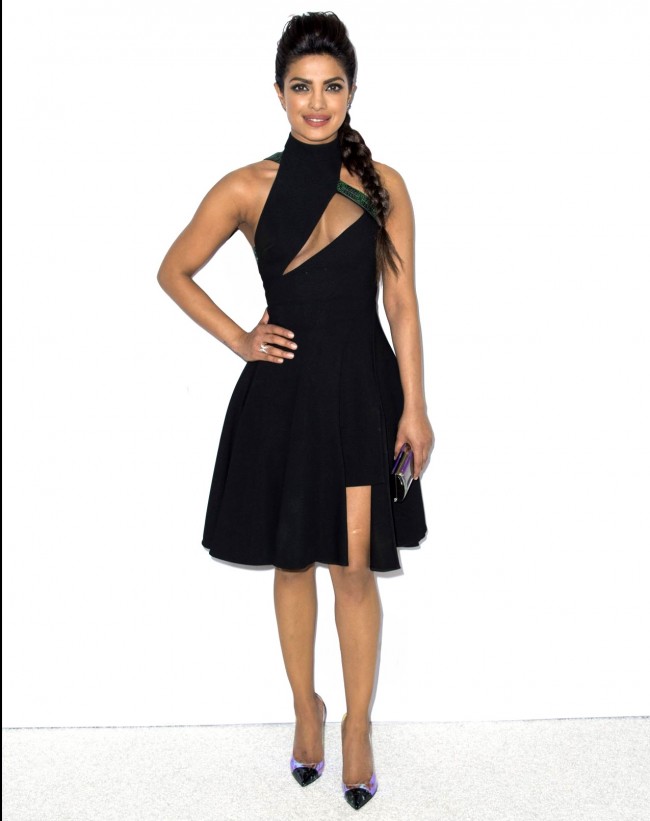 New Delhi, Jan 28 (IANS) Cross continent travel and “insane” timelines are a part and parcel of Priyanka Chopra’s life as a celebrity, who juggles her Bollywood assignments in Mumbai with her life in Montreal as the protagonist on an American TV show. An actress with the Midas Touch, she says the key is “to not back down… Face it head on, build a good support system and just work damn hard”.

With her roots in Bareilly, Priyanka’s first big win came when she clinched the Miss World title in 2000 after beating contenders from 94 nations. She was all of 18 back then.

At 33; she’s a National Award winner, the first South Asian actress to win a People’s Choice Award, and a Padma Shri recipient.

“Nobody knows where life will take you or how successful you will become… I came into the business knowing nothing… I just kept my head down and kept working,” Priyanka spoke about her career trajectory in a phone and email interview to IANS from Montreal, where she’s busy working on her American show “Quantico”.

The actress, who’s also a singer, is also enjoying her role as a producer.

Is your current life the dream that you ever hoped for?
Nobody hopes about these things, but yes, nobody knows where life will take you or how successful you will become. I was so nervous when ‘Quantico’ got released. I never knew it would become popular. But here I am, happy about the choices that I have made. Being chosen for the Padma Shri is extremely special.

I came into the business knowing nothing, and I’ve learnt a whole lot. I just kept my head down and kept working.

Doesn’t travelling take a major toll on you?
More than anything, the actual cross-continent travel used to take a toll on me but now I’ve got accustomed to it. I’ve found ways to handle it both physically and mentally. The key here is that I want to do all of it and that’s enough of a reason to push myself. Also, I’ve always thrived on pressure and insane timelines, so it makes it a whole lot easier to handle now.

You’ve always been fearless about treading the unbeaten path. Producing original content for mobile apps is also a fairly new field — what urged you take this leap of faith?
Because it offers such a wide canvas. There are no rules or formulas to creating content for this space and that’s what makes it so exciting for me. I’m thankful to Fluence and Endemol-Shine India for being such a formidable force and co-producers on our maiden digital venture.

There’s news that you’re producing regional films — when do we see a full-fledged Bollywood film from your banner?
We have a lot of projects under discussion and you can expect an announcement from us shortly. We don’t want to rush into anything and are very carefully selecting the projects we want to produce. As I’ve said earlier, the vision is to create a platform for great stories to be told and for new talent to be discovered and promoted.

How do you relate to the ethos of “It’s My City”, especially since you also came to Mumbai from another city?
There is definitely a parallel that can be drawn to my own story. I came to this city not knowing a single person. I lived as a paying guest, travelled by local trains, pursued my ambitions and chased my dreams. This story is of four girls who are unrelated to each other yet through the course of the series form a strong bond and friendship.

To correlate to that, one of my very best friends today is someone I met as a flatmate in my paying guest digs. Those kinds of friendships with all the experiences we had, are lifelong bonds created.

This city can be hard on you, but it is equally welcoming and full of opportunities. When you set out to build your future, you will always face challenges — everyone does. The point is to not back down. Face it head on, build a good support system and just work damn hard.

In what ways did Mumbai, the film industry and its people help you in the journey?
I think it equips you to handle all kinds of pressure. It is called the city that never sleeps for a reason. I love Mumbai and everything it has given me. The industry is my home now and one I am privileged to be a part of.

You’re almost reliving that experience while in Montreal for your international assignment. But the experience may be different considering you are a star now?
It is not the same. I have come here (in Montreal) after creating a certain position for myself, so things are way different from when I started out. The work environment is similar except for the difference between shooting for TV series and film. They have a different schedules, pressures and moods.

I don’t pay much heed to the bells and whistles of being a star. it’s my creative environment that matters and currently it’s absolutely amazing.