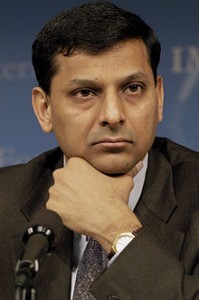 Washington, Oct 13 (IANS) With a “little bit of euphoria” surrounding him with the arrest of the Indian rupee’s slide, RBI’s new governor, Raghuram Rajan, has sought to temper expectations saying “I am not a superman”.

Portraying himself as a regular guy with “a wife and two kids,” he told a Washington audience Saturday what the country’s central bank could do or not do.

“Expectations are high. There is a little bit of euphoria in India,” said Rajan, a former Chief Economist at the International Monetary Fund (IMF) and economic adviser to Prime Minister Manmohan Singh, at an event at the Institute of International Finance.

But “clearly I am not a superman,” said Rajan, who has often been portrayed in the media as a “rock star” of finance.

“We can do more than what a central bank in an industrial country can do. But we can in some ways do less,” he said.

“On where we can do more, clearly there are a lot of low hanging fruit in the financial sector,” he said.

He noted that the Indian government was doing a “fair amount of reform” which needs little bit of time for the results to show up.

“The problem of being in academics and then getting into these positions is there is a well documented trail of thinking,” said Rajan, who is currently on leave of absence as a professor of finance at the graduate business school at the University of Chicago.

India must not be seen as a country in crisis, he said, days after declaring that New Delhi would not run to the IMF for money for at least the next five years and maybe even beyond.

“We have $280 billion of forex reserves. Come on!” he exclaimed, adding that India was, in fact, lending to the IMF.

“I think the perception should change now.”

He said India was facing turmoil in the financial markets but was away from any crisis-like situation.

“We are a country which has a debt of 66 percent of GDP, 90 percent of which is denominated in rupees. External debt was 22 percent of GDP and reserves at 15 percent of GDP. We can pay back all the short-term debt tomorrow,” he said.

He said India has issues in the financial sector. There were inflation challenges; there was a need to get back to a high growth trajectory. “But these are certainly not crisis issues.”

Sweet treats for the festive season