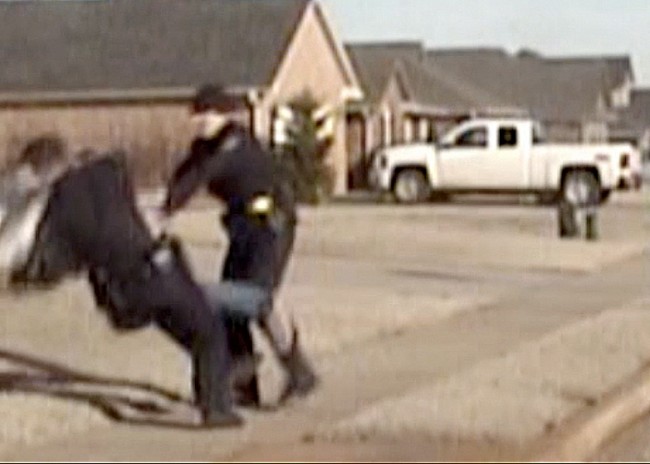 Washington, Feb 24 (IANS) The lawyer of an Indian grandfather who was assaulted by an Alabama police officer leaving him partially paralysed has in an amended lawsuit detailed how his repeated attempts to explain went in vain.

The amended civil rights lawsuit filed in federal court Friday seeks unspecified compensatory and punitive damages for the Feb 6 assault on Sureshbhai Patel, 57, while he was taking a walk in front of his son Chirag Patel’s house in a Madison suburb.

It has dropped the charges against a second police officer, a trainee, and no longer accuses the department of making up the emergency call or hiding the dash cam.

Parker was arrested for assault after Madison Police released an audio of the call and the dash cam video that showed Parker taking Patel down.

According to the lawsuit, Patel had arrived in the US only days before to assist his son and daughter-in-law in caring for their 17-month-old son, who was developmentally delayed after a premature birth.

Giving the circumstances of the case leading to the assault, the lawsuit says, “Patel dressed for the walk in plain pants, a button shirt, a sweater, and a knit cap.”

“He had nothing in his pants except for a green patterned handkerchief that was later used by officers to wipe blood from Patel’s face.”

On the morning of Feb 6, “Patel walked the same path he had walked on other mornings since arriving in the United States, straight down Hardiman Place Lane, the street on which his son lived, and back.”

Patel’s prior morning walks were without incident, but that morning a “neighbour called the Madison Police Department and reported Patel as a suspicious person.”

“Parker, a field training officer, and a police officer trainee were dispatched to investigate,” it said. “Parker and his trainee parked their patrol car, approached Patel, and ordered him to stop.”

Patel told the officers “no English,” “Indian,” “walking,” and pointed down the street and said “house number [actual number],” as he continued to attempt to explain the situation to the officers.

The lawsuit said “Patel is a small man, weighing between 130 and 140 pounds, probably closer to 130, and is narrow of frame and mild of manner. He appeared to be nothing other than the grandfather from India he was.”

“Parker then searched Patel for weapons,” it said calling the search as “unnecessary and illegal, as there was no reason to believe Patel was armed or presented any kind of danger or threat.”

“After the search, without provocation, Parker restrained Patel’s arms and slammed Patel face first into the ground,” the lawsuit alleged.

This use of force was unnecessary and excessive, it said noting “Patel’s face was bloodied, but, much worse, there was significant trauma to Patel’s spinal cord, and he immediately became paralysed in his arms and legs.”

Emergency personnel were eventually called, and Patel was first taken to Madison Hospital and later transferred to Huntsville Hospital because of the severity of his condition.

Patel, who required surgery to fuse broken vertebrae together, has regained movement in his arms, though he still cannot grip anything with his hands, the lawsuit said.

He has also regained some use of his right leg, but remains paralysed in the left.

He was transferred to a Huntsville rehabilitation centre on Feb 16. His wife, Shakuntala Patel, is seeking a humanitarian visa so she can come to the US to see her husband.