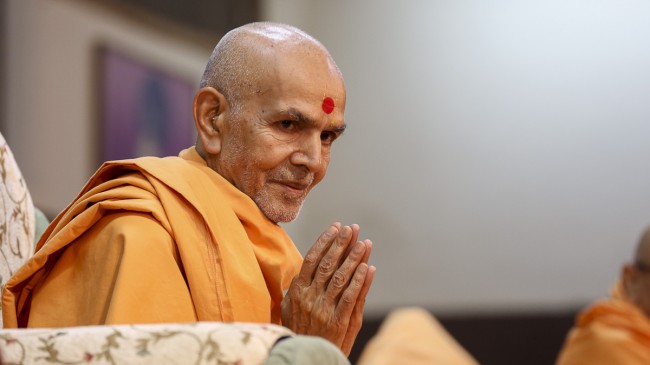 Atlanta, GA, June 2: The spiritual legacy of His Holiness Pramukh Swami Maharaj continues in North America with the pending arrival of His Holiness Mahant Swami Maharaj in Atlanta, GA on June 22, 2017.  Over the next three months, he will visit mandirs and inspire thousands of devotees in Atlanta, Chicago, Houston, Dallas, Los Angeles, San Jose, New Jersey (Edison and Robbinsville), and Toronto, Canada.  His visit will be filled with traditional celebrations, spiritual discourses, various seminars, and special events open to the community.

Since the earthly departure of Pramukh Swami Maharaj, Mahant Swami Maharaj now continues the lifework and legacy of Pramukh Swami Maharaj as the sixth and current spiritual successor of Bhagwan Swaminarayan.  He was born in 1933 in Madhya Pradesh, India.  In 1961, at the age of 28, he was ordained as a swami and given the name of Sadhu Keshavjivandas by His Holiness Yogiji Maharaj, then guru and spiritual leader of BAPS.  Yogiji Maharaj recognized his leadership abilities and bestowed upon him numerous responsibilities including appointing him as the mahant, or chief priest, of the BAPS mandir in Mumbai, India. Thus, the name ‘Mahant Swami Maharaj.’

After Yogiji Maharaj’s earthly departure, Mahant Swami Maharaj dedicated himself totally to Pramukh Swami Maharaj, the fifth Guru of BAPS.  Under his guidance, Mahant Swami Maharaj relentlessly traveled to remote areas in India and abroad to inspire moral values and enlighten countless devotees.  He was also called upon to be in the forefront during major celebrations and as a trusted advisor regarding critical decisions related to the organization.

As the current Guru of the BAPS Swaminarayan Sanstha, Mahant Swami Maharaj has led by exemplifying devotion, humility, and selflessness.  He visits with devotees around the world to nurture faith in all individuals, promote family values and unity, and strengthen communities small and large.  Pramukh Swami Maharaj’s vision continues to be his driving force behind guiding spiritual activities and organizational efforts as well as pursuing development projects to advance youth programs.

In the past year, he has continued his vicharan, or spiritual travels, throughout the world, and has thus far visited almost every major BAPS mandir in India and Africa.  During his visit to the United States and Canada, he will attend numerous special celebrations including the ten-year anniversaries of the BAPS Shri Swaminarayan Mandirs in Atlanta, Toronto, and San Jose as well as a Murti Pratishta, a ritual to sanctify the murtis, for abhishekh in Robbinsville, NJ.  After his three-month journey, he will continue onwards to the United Kingdom and the Far East regions.