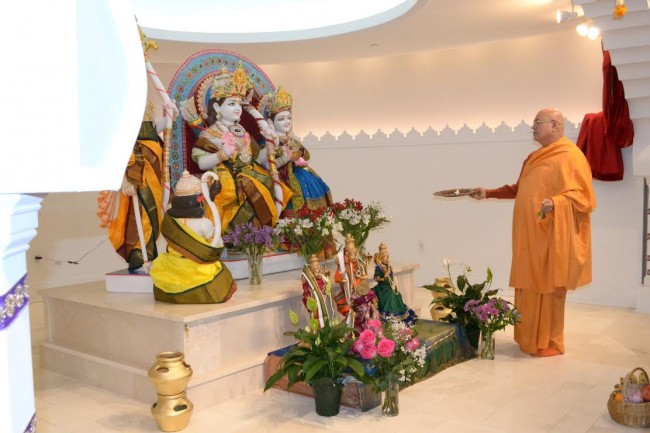 Swami Adhyatmanandaji lighted the diyas, and all joined him in front of the dazzling, Ram Parivar deities to offer prayers and aarthi.

The attendees then moved to the adjoining room for the homage ceremony. VHP,Atlanta’s past President Kusum Khurana welcomed all and requested them to introduce themselves. 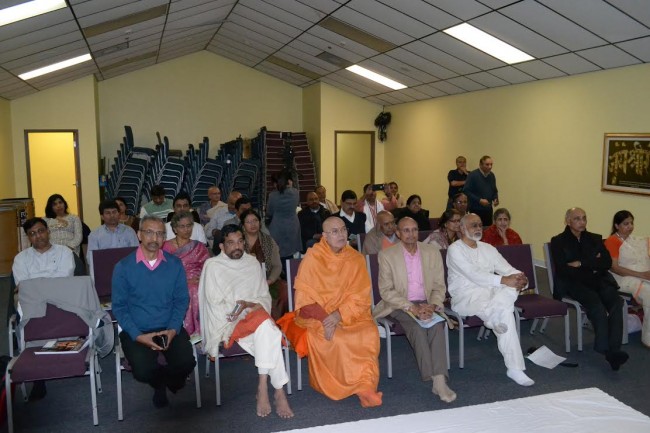 Khurana said that Atlanta was fortunate to host Ashokji Singhal in August this year and to listen to his scholarly talk. The gathering was shown a video clip of his address inAtlanta, on August 30, 2015.

Shiv Aggarwal introduced Swami Adhyatmananda, and said swamiji who is inAtlantafor the Maha Ati Rudra Yagnam is no stranger to the city. He has played a big role in spreadingIndia’s cultural heritage through yoga, pranayama and meditation. He has organized over 200 blood donation camps, given discourses on Gita, Upanishads, Srimat Bhagavat, etc. in simple language which has inspired millions of his listeners. He has been bestowed with many prestigious awards for his services to the nation. “We regard him as our household Guru,” Aggarwal said.

Ashok Singhal was born in Agra, India, and was an international working president of Vishwa Hindu Parishad (VHP) for over 20 years. He graduated from theBenaresHinduUniversity in metallurgy and geology. He then joined the RSS soon after as a Pracharak. Ashokji Singhal held many positions in the VHP since 1983.He was one of the leading lights of the Shri Ram Janmabhoomi movement. Despite his poor health he undertook a month-long organizational trip along with some of his Sah-Yogis to the UK, Holland and USA in August-September this year. InAtlanta, on Sunday, August 30, he guided his listeners on the meaning of Dharma and their responsibilities in protecting it.

Singhal led an exemplary and inspiring life of selfless service that will inspire millions in the coming years. Narendra Modi described him as a “force behind several noble deeds and social work,” and said,” The demise of Singhal ji is a deep personal loss. He was an institution in himself whose life was centered around serving the Nation.”

In his eloquent, compelling and inspirational address in Hindi, Swami Adhyatmananda exhorted all to remain united. Different states and regions inIndiamay have different languages, different dresses, different food, different festivals, customs and traditions but that should not divide the nation. They are like different flowers but the string that runs through the beautiful garland and binds them isIndia. “We should all consider ourselves Bharatiyas.You have all come to theUnited States. Many of you have becomeU.S.citizens. There is nothing wrong in being loyal to and proud of your adopted land but you should not forget your roots inIndia. You should take pride in your rich history and cultural heritage, customs and traditions. Please remember what Lord Rama said, Janani janmabhoomischa swargadapi gariyasi ((Mother and motherland are superior to heaven).” May we abide in lofty thoughts of truth, non-violence, forbearance, the ways of our scared Ramayana, our Bhagawatam; our Vedas; our Upanishads. Ahimsa Paramo Dharma (Non-violence is our topmost duty).”

He said he felt very happy to see Bal Vihar’s young students chanting the highly revered Gayatri mantra and other Vedic mantras in early morning at the Hindu Temple of Atlanta and complimented Bal Vihar’s dedicated teachers for their noble work of imparting Ved Gyan to the young generation. Noted founder of Bharatiya Vidya Bhavan, Dr. K. M. Munshi in Mumbai had said that children can memorize at an early age and understand the meaning when they grow up.

Swamiji touched upon the need to protect and conserve the sacred Ganga and the Himalayas and to promote awareness against environmental degradation.

Swamiji said he has very fond memories of his close friendship with Singhal.LakeManasarovarhas depth;Himalayashas height but Singhal had depth and height, he said. “He was proud to call himself Hindu. Wherever he went he chanted Bharat Mata ki Jai (Glory to Mother India) to cheer up and inspire his supporters. Let us forward carry his legacy,” he said.

After all the attendees made their floral offerings to the Singhal, Kusum Khurana moved a Vote of Thanks.