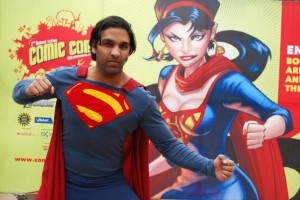 The fourth edition of the Comic Con India annual convention has moved to the spacious 50,000 square foot spread of Thyagraj Stadium, leaving behind the cramped confines of Dilli Haat.

This development, in fact, has worked best in favour of visitors, who are spoilt for choice with around 100 exhibitors participating in the festival that concludes Sunday.

And in the sea of graphic novels, popular comics, merchandising stalls and gaming parlours, some out-of-the box ideas stood out and found many takers.

Uday Vir Singh from Jalandhar in Punjab had quirky posters and t-shirts on sale. One poster was that of Mona Lisa in Indian attire and another one was of three superheroes – Batman, Superman and Hulk – paying tribute to Indian martyr Shaheed Bhagat Singh.

A touch of Punjab was evident on every item on display and the 22-year-old admitted the influence comes from his roots. “I wanted to give an Indian touch to things that are globally known and people can instantly recognize. The Punjabi touch has come from my roots,” Uday Vir Singh, the owner of Desi Pun, told IANS.

“People can relate to these items and understand the quirky humor in them,” said Uday Vir Singh, who has a bachelors in animation and multimedia.

The series has borrowed its story line from popular Bollywood movies like “Hum Aapke Hain Kaun”, “Aandhi”, and its title from the most clichéd Bollywood characters – a widhwaa maa (widowed mother) and andhi behen (blind sister).

“It is a spoof on popular Bollywood movies with these female characters playing the lead. Comics have to be fun and the idea was to create something that will make people laugh,” said a graphic designer from the team of the comic series.

Apart from this, the desi version of Wolver Anna is the true representation of Indian cinema meeting the superhero.

“Look what they have done to Wolverine,” said an onlooker who spotted the irrepressible Rajinikanth in the superhero attire.

While graphic prints have entered a whole new dimension by finding their way to clutches, bags, wallets, note-book covers and scarfs – the colourful compositions and psychedelic prints too were a popular lot.

Vatsal Panchal from Gujarat used popular attractions like the Eiffel Tower and Taj Mahal motifs in his silk scarves.

“If you take something that is already popular and use it in your designs, it gets instant attention. All you need to do is find right things to meet
the need of target audience,” he added.