Bikshu Nayak, who came from India was the star that shone in bright daylight. He sang on stage and off stage. He sang for women, with women; for children, and with children. He coaxed them, he cajoled them, he goaded them and challenged them to line up, to hold hands, to sing and dance that he looked like the fabled Pied Piper. It just looked like Bikshu himself was Batukamma in spirit. The local artist duo Janardhan Pannela & Srinivas Durgam contributed to entertain the crowds that just kept growing. Every one – children, girls, and women danced to the tunes of Telangana folklore that were nostalgic and melodious. 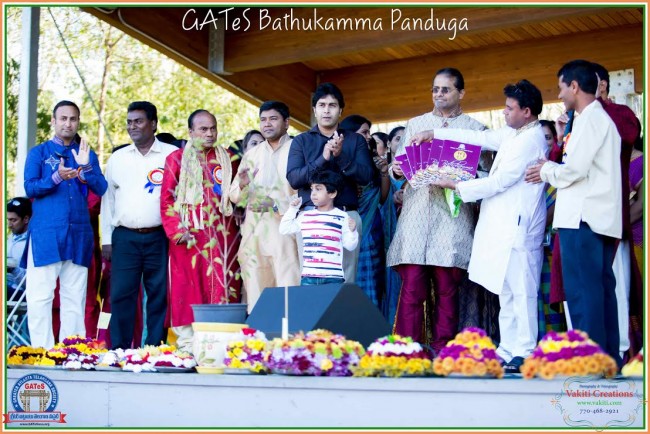 The 10th Bathukamma festival organized by GATeS (Greater Atlanta Telangana Society, formerly known as Telangana Community, is a non-profit charity organization of, by and for Atlanta Telangana community) in River Side Park, Roswell will be remembered as a landmark event for a long time to come. It was not just the gathering – well beyond 2,000- but also the participation and involvement of children and women from Telangana. The women toiled long and hard for days and late into the night before they showcased their talent and excellent performance. Children practiced for many days to entertain the large crowd with folk songs.

Consul Dharam Vir Singh from the Consulate General of India released a beautiful souvenir to commemorate the 10th Annual Bathukamma celebrations in metro Atlanta by GATeS that has grown by leaps and bounds – from a small community of 10 Telangana families (under the leadership of Late GS Reddy in 2006) to a large community of several thousand families in 2015. The Riverside Park ground could hardly accommodate all the participants.

The day’s program started with a prayer Song by Snigdha, Srinidhi & Srihita and the lamp was lighted, followed by a fantastic classical dance by Nataraja Natyanjali Dance School. Rohana Chada sang a devotional song. Karthik Kodakandla (music director for Telugu Movie Bandook) sang the super hit song from the movie. Also, he had a special song written and composed on GATeS’ 10 years of service and Batukamma celebrations, which was well received by the the jubilant crowds.

It was an evening unlike any other when the women formed a human chain. The giant chain of beautiful women dressed in colorful saris looked like a nose ring specially made for Goddess Gauri – the deity of Bathukamma.

The emcees Viju Chiluveru, Anitha Nellutla, Jyothsna Palakurthy and Swapna Katta were beyond comparison who kept the audience engaged for nearly four hours with light banter of Telangana culture. As GATeS does every year, Bathukamma competitions were held this year and participants gave a tough time to the panel of seven judges in judging the best Bathukammas. Madhuri, Shviti Reddy & Sailaja Pedireddy grabbed first, second and third Batukammas in individual category while Vasavi Pisike & Group, Madhavi Krothapally & Group and Kakatiya Group grabbed the prizes in groups category. Due to the over-whelming enthusiasm in participants, numerous consolation prizes were also given in both categories.

DJ services was provided by Divinity Audio while Photography & Videography was by Vakiti Creations. 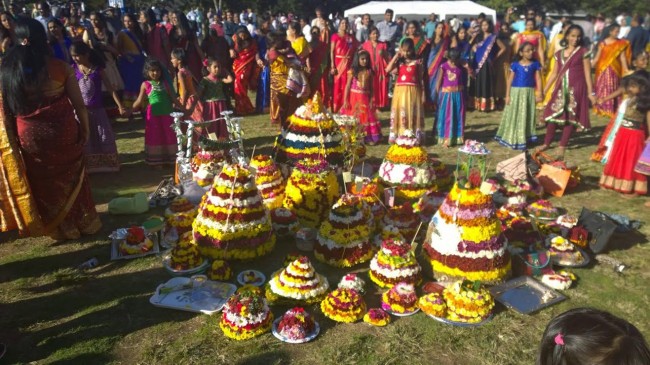 Indian-American giving could dwarf US aid to India: Report