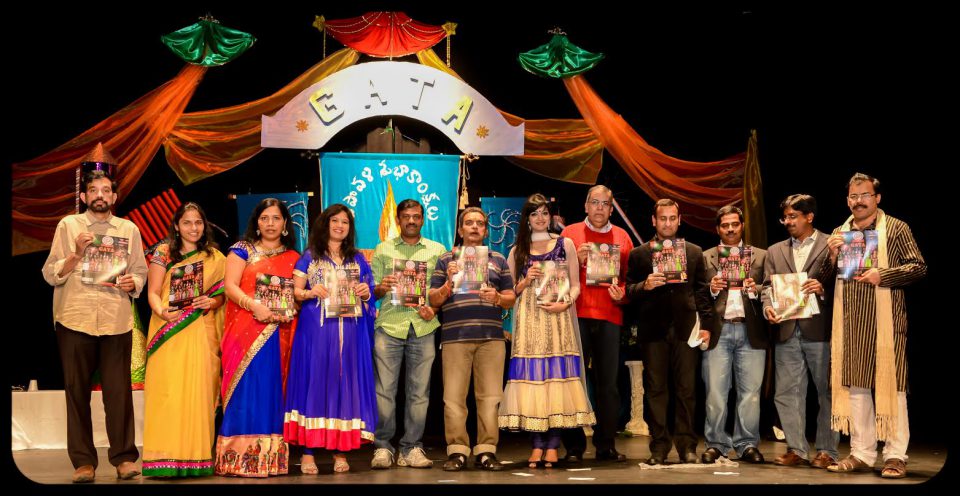 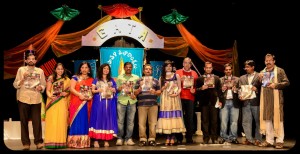 (Click on photos for high-resolution view. Photos by Sridhar Vakiti.)

Atlanta, GA: GATA celebrated Diwali with great grandeur on Nov 9 evening at Berkmar High School. Over 700 people participated in the grand event. South Indian actress Vimala Raman was the chief guest, while singers Sagar and Ranina Reddy were guests of honor on the occasion. Other Tollywood artists, senior comedian Chitti Babu, character actress Madhumani and dancer Chandini were the other special guests who added star presence and entertained the Atlanta Telugu families with their energies and talents. 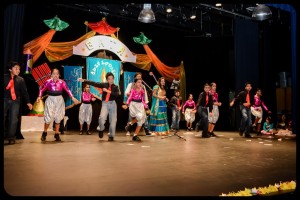 The program started with ‘jyothi prajvalana’ by the guests Chitti Babu, Madhumani and prominent leaders of the community Narender Reddy, Bala Indurti, Viju Chiluveru, Ratnakar Eluganti, GATA chief coordinator Venu Pisike and coordinator Rani Vakiti. Students of Sasikala Penumarti from her Academy of Kuchipudi Arts performed brilliantly to the ‘Ganesha Kowtvam’ dance and helped kick off the event. To commemorate the 150th birth anniversary of Swami Vivekananda, Sri Dutta Raaga Fine Arts performed a Dance Drama “Swami Vivekananda” which enthralled the audience. Several children and adults participated in this drama which was written and directed by Aparna Turaga.

The eagerly awaited “Tollywood hungama” began with a mesmerizing dance performance by Chandini.  Singers Sagar and Ranina Reddy took the event to a next level and completely rocked the show with their incredible talent, fine wit and natural sense of humor. The dance performances by the students of ‘Shiv’s Institute of Dance’ comprising of Telugu hit songs was the icing on the cake, leaving the audience requesting for encores. The audience gave a standing ovation to the extraordinary singing by Sagar and Ranina and the dance performance by the kids to the song ‘Mee intikimundo gate’ from the movie Julai. 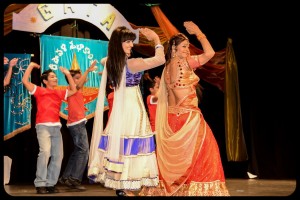 The GATA Team recognized the women volunteer team which was instrumental in the success of all GATA events in 2013. Jyothi Goli, Aparna Turaga, Swathi Sudini, Sirisha Paradarami, Neeraja Goverdhana, Jyothi Kasireddy and Aparna Potturi received the mementos for their outstanding and unconditional volunteer support throughout the year.

The highlight of the evening was the fireworks that was arranged outside the theatre soon after the cultural events. Many families engaged themselves nearly an hour celebrating Diwali by lighting varieties of crackers. GATA chief coordinator Venu Pisike thanked his team mates for working very hard over the last few weeks to put together such a grand show and also in helping GATA organizing unique and wonderful events throughout the year. He also thanked the sponsors and many volunteers who were instrumental for the success of Diwali.

“Every Telugu family in Atlanta can proudly affirm that the warmth and affection of our cherished festivals and culture, are to be found in abundance in our adopted home here because of the sincerity of purpose of the GATA team members,” said Pisike.

Many people were responsible for the success of the event. Venkat Chennubhotla managed the audio exceptionally well and acted as program MC along with Phani Dokka. Bindya Panguluru and Rajyalaxmi Anugu helped with the Diwali sweets prep. Ed Anandapu designed the stage along with his wife Amaravathi and other women volunteers who also set up the front stage and reception area. Satya Karnati, Shankar Gandra and Srinivas Avula helped backstage, Goutham Goli and Venkatesh Polu with transportation, Sridhar Vakiti and Praveen Boppi as usual did an excellent job with photography and video coverage. TV5 and Mana TV were the exclusive media partners for the event. GATA coordinators managed their assumed roles exceptionally well. Sunil Kuturu with food and fireworks, Rani Vakiti with decoration, Madhav Kusam with guest transportation and accommodation, Anupama Subbagari with the vendor stalls.