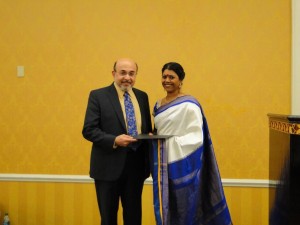 Atlanta, GA: Georgia Association of Physicians of Indian Heritage (GAPI) awarded Subathra Sudarshan and Suellen Daniels with the ‘Humanitarian Award’ for 2014 for their tireless community service. Subathra is the founder and director of Third Eye Dancers (a Georgia not for profit organization and founder for Bharathakala Natya Academy, a premier Indian Classical Dance Academy in Johns Creek. Suellen is the executive director of Meals by Grace.

Subathra founded the Third Eye Dancers, to increase awareness about social issues affecting children, including education, environmental, abuse & those related to health and make all the possible humanitarian efforts to help these deserved children irrespective of creed, caste ,religion , sex or ethnicity . Over the years Subathra has led the organization effectively and sowed seeds in second generation Indian children/ teenagers about the value of humanity by encouraging them to part take in several initiatives and contributing both in kind and money.  Subathra has gone a major step beyond providing exemplary humanitarian service by single handedly conceptualizing and forming an organization (Third Eye Dancers Youth Council) to teach and spread the value & the importance of the humanitarian service to the younger generation children. The council has been very proactive in reaching out and helping the needy through various programs. Helping with Cystic Fibrosis Foundation of USA, Leprosy kids in Tamil Nadu, Education of Bhutanese refugee children, CNN hero Madurai Krishnan’s Akshaya trust for feeding mentally challenged poor people, poor dialysis patients with kidney failure through TANKER organization are some of the initiatives where she taught and involved the Children to be part of the helping hands.  Subathra was honored by Forsyth county school system in the ‘Honoring our Heroes’ function.  We are now currently witnessing many success stories of her efforts both in Georgia and India.  Subathra’s next event ‘Once upon a Time- Beauty and the Beast’ on October 26th will be a fundraiser to aid abused children and war veterans in Georgia.

Naadhabrahmam conferred ‘Nrithya Sevika’ title on Subathra on December 12th 2013 during the 12th year Art festival ‘Sangeetha Raga Mahothsavam’ in recognition of her outstanding services and achievement in the field of Indian Classical Dance. 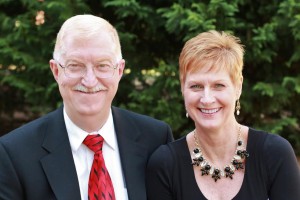 Suellen Daniels and Stephen Daniels, her Husband of 37 years  lost everything, jobs,  savings, retirement and their  ability to earn income in 2010. In the midst of their own misery, one day,  this couple  heard from their  County Volunteer Coordinator  that Forsyth county, one of the richest counties in GA, also  has one of the highest levels of families in extreme poverty as well. They were told that over 32,000 children and their families were going to bed hungry every night.

Suellen and Steven Daniels wowed that day that it would not happen in their watch. The idea for the ministry came in a flood; “Meals by Grace” would be a mission to assist struggling families in Forsyth County by supporting them in their desire to provide healthy nutritious meals for their families and knowing they are currently unable to do so. They began cooking for the starving, poor families in their own kitchen and as they grew, they invited the community to come and help. That first year they delivered over 2,853 meals. Later, they moved the kitchen to the Grace Chapel Church and expanded it to a larger scale.

They ended out 2012 serving 6,128 meals and added Kids Bags of Love to bridge the long summer months where the children on free and reduced cost lunch go without that support. Then in 2013 the growth continued, bringing volunteers and groups from not just Forsyth County but several surrounding counties, uniting civic, religious, and social community members from all around (averaging 50+ every week) to prepare and deliver meals. In May of 2013 they were awarded a CASA (Court Appointed Special Advocates) Light of Hope Award for the significant impact they had made in helping children and their families. They ended 2013 having served 8,364 meals to hungry children and their families. Having been nominated for the 2014 Forsyth County  special  Awards, offered for well-deserved organizations recognition for their achievements and contributions to the community, they hope to spread the word further about the desperate needs of those 32,000 children and their families and garner even further support.

Meals by Grace, under the leadership of Suellen Daniels, was awarded 501-3c status by IRS earlier this year and is overseen  by a board of directors  which consists of community leaders including  GAPI President Dr Indran Indrakrishnan.