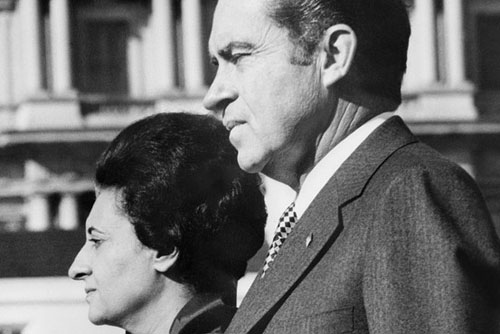 Washington, Jan 19 (IANS) As President Barack Obama embarks on his second trip to India in fours years to be the chief guest for Republic Day, it’s noteworthy that only six US presidents have visited India in 67 years since independence.

Top level exchanges between world’s largest and the oldest democracies began with India’s first prime minister Jawaharlal Nehru visiting the US in 1949. But it took another ten years for Washington to return the call with president Dwight D Eisenhower going to India in December 1959.

John F. Kennedy, who succeeded Eisenhower, could not visit India, but sent vice president Lyndon Johnson to India in the very first year in office in 1961. First Lady, Jacqueline Kennedy toured India the next year. Kennedy was assassinated in November 1963.

Richard Nixon came calling as president in July 1969, six months after assuming office, to ease tensions with then Indian prime minister Indira Gandhi. The two leaders never really hit it off with Nixon taking a hostile stand against India during the 1971 Bangladesh war.

It would be another nine years before Jimmy Carter became the third US president to visit India in January 1978 after the general elections in India in 1977 when Gandhi lost power after popular revolt against her emergency regime (1975-77).

The US soon became India’s largest trading partner, but Carter who came to deliver a “cold and blunt message” to India over its nuclear ambitions failed to get Morarji Desai’s Janata Party government to sign the Nuclear Proliferation Treaty.

It was another 22 years before Bill Clinton came in March 2000 to take out the chill from India-US relations since India’s second set of nuclear tests at Pokhran in 1998. In many ways, this was a turning point in Indo-US ties that were earlier termed as “estranged democracies”.

Clinton, who came with his daughter, visited Jaipur, Hyderabad and Mumbai besides Delhi during a five-day trip, the longest by a US president.

George W Bush, who was the fifth US president to visit India, in March 2006 with first lady Laura and estasblished a rapport with Prime Minister Manmohan Singh. His 60-hour visit, by far the shortest after Nixon’s 23 hours, marked the beginning of the end of India’s “nuclear apartheid” with the two countries signing the historic India-US nuclear deal.

Barack Obama, who had in November 2009 held the first state dinner of his presidency in honour of then prime minister Manmohan Singh, visited India in November 2010. He became the second US president after Nixon in 1969 to visit India in his first term in office and the second after Eisenhower to address a joint session of the Indian Parliament.

Calling the India-US relationship “a defining partnership of the 21st century,” he also backed India’s quest for permanent membership of UN Security Council.

Now Obama is set to notch two more firsts. He will be the first US president to be the chief guest at India’s Republic Day celebration as also the first to visit India twice while in office.