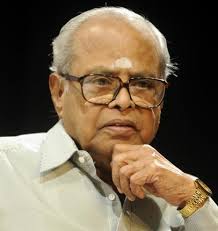 Balachander was ailing for some time and was admitted to the Kaveri Hospital here where he breathed his last. He was suffering from a urinary infection and other age-related ailments. The auteur’s manager confirmed the news.

“Balachander sir passed away. He was recovering well over the last few days but his condition deteriorated this (Tuesday) morning,” he told IANS.

Balachander had over 150 films to his credit, including “Aval Ora Thodar Kathai”, “Avargal”, “Varumayin Niram Sigappu” and “47 Natkal”. He was also instrumental in bringing talents like Kamal Haasan, Rajinikanth, Saritha and Prakash Raj to the industry. Balachandar’s Hindi movie “Ek Duuje Ke Liye” was where Kamal Haasan and Rathi Agnihotri made their Bollywood debut.

Dubbed “Iyakunar Sigaram” – or director’s peak – Balachander was born in a Tamil Brahmin family in 1930 in Thanjavur district.

At an early age, he was attracted to theatre and drama and took part in stage plays.

After graduating in zoology, Balachander joined the Accountant General’s office and pursued his theatre interest with the United Amateur Artistes, a drama company.

Later, he started his own drama company and his play “Major Chandrakanth” became a hit.

After entering the tinsel world, Balachander made the play into a movie which was also a big hit.

Many of his hit movies were earlier stage plays like “Server Sundaram”, “Neerkumizhi” and “Mezhuguvarthi” among others.

All his dramas and movies revolved around middle class characters and involved a lot of inter-personal relationships.

He made his debut in the Tamil movie world with “Neerkumizhi”, starring comedian Nagesh. It was followed by movies like “Major Chandrakanth” and “Bama Vijayam”.

Soon Balachander started making movies based on social and family issues, some of which were revolutionary in those times.

His “Arangetram” movie revolved around a Brahmin girl’s poverty and her getting into prostitution to sustain her family.

It was in this movie that Kamal Haasan played his first adult role.

The story revolved around a youth (Kamal Haasan) falling in love with a women several years elder to him. The women’s daughter (Jayasudha) was attracted to Kamal Haasan’s father.

It was in this movie that Balachander introduced Rajnikanth.

Balachander was also involved in television serial production in the 1990s.

He was also instrumental in launching the careers of actors such as Saritha, Sujatha, Vivekh and Prakash Raj.

Vivekh posted on his Twitter page: “My mentor gone! My radical lion is gone! The peerless legend is gone! I have lost my dad again.”

Most of his films in other languages were remakes of his own Tamil films.

Balachander was a recipient of the Dada Saheb Phalke Award. He was awarded the Padma Shri in 1987.