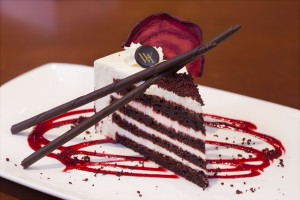 By Monish Gujral (10:20)  Sitting by the window of the coffee shop of the famous Waldorf Astoria Hotel in New York, enjoying the beautiful summer morning and sipping my Arabica beans coffee, I suddenly had this urge for something sweet. On summoning a steward to give me a menu, he recommended the red velvet cake, the house specialty The cake and its original recipe are most well-known in the United States thanks to Waldorf Astoria.

A red velvet cake, with a dark red or a bright red color, is usually prepared as a layer cake topped with a creamy vanilla icing or mostly with cream cheese icing. The reddish-brown co lour of the cake was originally from a reaction of the cocoa powder with an acidic ingredient such as buttermilk. However, red food coloring is often added these days.

Red Velvet has a proportionally red history behind it. When food was rationed during the Second World War, bakers used boiled beet root as a substitute for coloring to enhance the customer appeal of their cakes. Boiled grated beetroot is found in red velvet cakes even today. However, most bakers use red color.

A Southern variation of the cake is made with cream cheese frosting. Beetroot or beets are not used in the in this version.

In Canada the cake was a well-known dessert in the restaurants and bakeries of the Eaton’s department store chain in the 1940s and 1950s. Promoted as an exclusive Eaton’s recipe, with employees who knew the recipe sworn to silence, many mistakenly believed the cake to be the invention of the department store’s matriarch.

A resurgence in the popularity of this cake is partly attributed to the 1989 film “Steel Magnolias” in which the groom’s cake (a southern tradition) is a red velvet cake made in the shape of an armadillo.

In recent years, red velvet cake has become increasingly popular and can be found in most cupcake bakeries.

1.Cream the butter, then cream in the sugar until very light.

2.Beat in the eggs, one at a time, then the cinnamon, vanilla, and salt.

3.Mix the cocoa, red coloring, and water, and add to the creamed mixture.

4.Sift the flour with the baking powder and add alternately with the milk. Blend well. If using an electric mixer, turn to lowest speed when adding flour and buttermilk.

5.Dissolve the soda in the vinegar and fold into the cake batter very carefully.

6.Turn the batter into two 9-inch greased and floured cake pans (or, if you like, grease the pans and then fit the bottoms with greased paper). Do not flour the pans heavily.

7.Bake in a preheated 350 degree oven for 25-30 minutes or until the cake springs back when pressed lightly in the centre.

8.Let cool in the pans on a rack for several minutes, then loosen and turn out on to the rack to cool.

9.When cool, frost with white fluffy frosting. Finally, if you want to spice up the cake you may add a teaspoon of cinnamon powder.